‘I have had positive talks. I’ll pick them up on Thursday and we will see if we can progress it’ 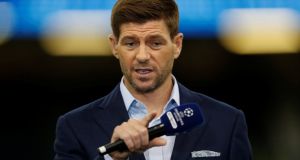 Steven Gerrard has confirmed that he has had ‘positive talks’ with Rangers about the vacant manager’s position at the Scottish club. Photograph: Carl Recine/Reuters

Steven Gerrard has confirmed “positive talks” with Rangers as he ponders the managerial position at Ibrox, with the former Liverpool captain to reopen discussions before the end of this week.

Gerrard is the favoured candidate of Mark Allen, the Rangers director of football, and Dave King, the chairman, with the Scottish club still confident they can coax the 37-year-old from his current position as a youth coach at Liverpool. This would mark Gerrard’s first job in management.

“The rumours are true, I have had initial talks,” said Gerrard. “I have had positive talks. I’ll pick them up on Thursday and we will see if we can progress it. We will see.”

Gerrard was speaking on BT Sport, for whom he is a pundit for both of this week’s Champions League semi-finals. He is known to want assurances from Rangers regarding precisely what resources will be available to mount a challenge to Celtic. Rangers have been without a permanent manager since the removal of Pedro Caixinha last October.

Gerrard’s comments arrived at the end of a day which had started with confirmation that Graeme Murty had been relieved of his position as the Rangers interim manager following Sunday’s 5-0 mauling by Celtic. Jimmy Nicholl and Jonatan Johansson will take charge of the Ibrox side for their three remaining matches of the season, with Rangers engulfed in a scrap to finish second – or even third – in Scotland’s top flight.

“The club hopes to be in a position to comment further on the managerial situation in the near future,” said a Rangers statement. Murty may yet return to his former post within the club’s youth system. - Guardian service

1 Owen Doyle: Creeping professionalism of schools rugby a threat to the game
2 Scotland’s Finn Russell missed training after Sunday drinking session
3 Niall Quinn happy to step into the breach at FAI
4 McNamara outlines the scale of opportunity for Ireland’s U-20s
5 Wolves left to rue profligacy as Liverpool roll on
Real news has value SUBSCRIBE
Crossword Get access to over 6,000 interactive crosswords