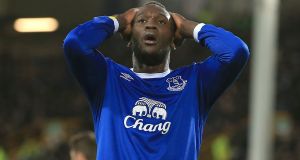 Romelu Lukaku has been ordered to appear in court in Los Angeles on October 2nd after receiving a misdemeanour citation for excessive noise, Beverly Hills Police has said. Photograph: Peter Byrne/PA Wire.

Romelu Lukaku faces court action in the US over “excessive noise” at a residence in Beverly Hills, police said.

The striker, who is on the verge of a £75 million move from Everton to Manchester United, was arrested on July 2nd at around 8pm after being given verbal warnings by officers.

A Beverly Hills Police Department statement, naming him as Romelu Lukaku Bolingoli, said the 24-year-old must appear at a Los Angeles courthouse in October.

A spokesman confirmed it was the Belgian international striker, who had posted pictures of him in LA on his Instagram and Twitter accounts.

“The citation was issued after officers responded to five other noise complaints from the same location, which resulted in verbal warnings.

“These noise violations occurred at a residence in Beverly Hills where Bolingoli was temporarily residing.

“Bolingoli was released at the scene with the citation and was not physically arrested.”

On Tuesday, just days after his brush with the law, Lukaku shared a photo on Instagram of him at an apartment in LA with Manchester United star Paul Pogba and NBA basketball player Sergei Ibaka.

Pogba, who became the world’s most expensive footballer after he joined the Manchester club for £89 million last summer, also shared a picture showing the three men posing and wearing all-white clothing at the same villa.

Lukaku will have to return to the city on October 2nd to appear at Los Angeles Airport Courthouse.