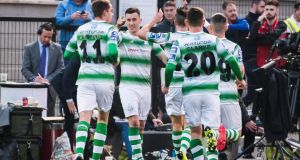 Shamrock Rovers produced a professional performance at a packed Brandywell against Derry City to make it eight straight wins and keep their eight-point lead at the top of the SSE Airtricity League Premier Division.

It was a day which will be remembered, not for footballing reasons, but for the tragic death of Lyra McKee, a journalist who tragically lost her life when shot dead 24 hours earlier during a riot in the Creggan area and both sides stood around the centre circle for a minute’s silence as a mark of respect before the kick-off.

When the game got underway, both sides were prepared to attack on what was a superb night for football. A well organised Rovers pushed the home side onto the back foot.

Rovers’ victory came down to a classic counter-attack, orchestrated by the impressive Jack Byrne in the 43rd minute, whose sublime pass sent Aaron Greene racing clear.

Greene carried the ball towards the edge of the penalty area before drilling a low shot into the net, past the advancing Peter Cherrie.

Derry’s Junior Ogedi-Uzokwe opted for a spectacular curling effort in the 13 minutes which failed to hit the target.

Two minutes later at the other end Dylan Watts got his head to a Byrne free but he also failed to hit the target.

As the first half drew to a close Ogedi-Uzokwe failed to meet David Parkhouse’s cross with a diving header, but it was Rovers who had the final say during the opening period with the game’s only goal.

Greene’s goal certainly had an effect but Derry did create a superb chance to equalise in the 53rd minute, Ogedi-Uzokwe playing Parkhouse through but he directed his shot straight at Alan Mannus and the Rovers goalkeeper made a vital stop.

Derry certainly huffed and puffed but the Rovers defence stood firm and they could have doubled their lead during injury time but Cherrie did well to deny Greene from close quarters.

1 Robbie Henshaw likely to be the only Irish change for France finale
2 Seán O’Brien: Anger over my parents’ break-up never left me
3 Cian Healy: ‘Realistically I got away with murder when I was younger’
4 Ireland's centre will hold thanks to Henshaw and Aki’s midfield muscle memory
5 Gerry Thornley: Antoine Dupont and France look perfectly primed for Ireland visit
Real news has value SUBSCRIBE