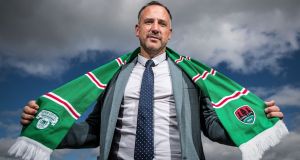 Neale Fenn has been formally unveiled as Cork City manager, five days after he informed Longford Town that he intended to leave the club and just three after he watched from the stand in Galway as his new team were well beaten in the FAI Cup.

City chairman Declan Carey acknowledged that Fenn has “a huge job” to get the club “back to where it belongs,” as they approach the end of what has been a desperately disappointing season.

John Caulfield departed after what was a poor start to the campaign and John Cotter was unable to generate the sort of improvement required even to steer completely clear of the relegation danger zone.

Fenn, who was on course to take on the promotion play-offs at Longford, now just wants the Premier Division outfit, champions just two years ago, to finish the season as strongly as possible before looking to the longer term future.

“We’re committed now to finishing the season as high as we can in the league. There’s a very strong group of players here. The spine of the team is Cork City through and through, you need that to be successful.

“It’s fantastic to be back here,” added the former striker, a member of the club’s 2005 title winning side. “I took a walk around Turner’s Cross and the memories came flooding back of the fantastic nights in front of the Shed End - winning trophies and those great European nights.”

Carey suggested that the board had been attracted by what they regarded as the attractive brand of football played by Longford during Fenn’s time there but he said that the job of turning things around at Turner’s Cross in the coming months would require the best efforts of all who want the club to do well: “supporters, players, staff, board – everyone.”

St Patrick’s Athletic, meanwhile, hope to make an appointment quickly after the departure of Harry Kenny over the weekend.

Ger O’Brien has taken temporary charge of the team but the club’s Director of Football is not expected to take the role on in the longer term and the Inchicore outfit, who only appointed Kenny at the tail end of last year are understood to be in the market for a younger coach even if it means going for one with much less experience than the few incumbents.