Round-up: Chris Wood scores twice as Burnley bring Norwich down to earth with a bang 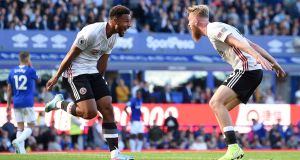 Sheffield United produced a dogged and determined performance to claim a 2-0 victory over a disappointing Everton side devoid of creativity.

The Blades managed just one shot on target – substitute Lys Mousset’s 79th-minute effort – in 90 minutes after Yerry Mina’s own goal had put the visitors ahead just before half-time.

Chris Wilder’s side, back in top flight for the first time since relegation in 2007, are unbeaten away from home since mid-January and this performance demonstrated why that was the case.

Organised, disciplined, decisive and committed to a gameplan – almost everything their hosts were not having gone behind vastly against the run of play.

Marco Silva’s team were previously unbeaten at home since February but having failed to press home their first-half advantage the latter stages of the game bordered on the chaotic in a hastily thrown-together formation as they tried to salvage something after last week’s chastening defeat at Bournemouth.

It was in stark contrast to the way the visitors operated, never once deviating from what Wilder had asked them to do despite seeing little of the ball.

Silva opted for Moise Kean up front but he looked like he was trying too hard to score, having not found the net since April 13th, although he was not presented with many opportunities.

One clever act of escapology out on the right saw him squeeze between the two bodies of Chris Basham and Jack O’Connell but his trickery was negated by a shirt pull pre-turn.

Everton’s domination of possession led to little in the way of chances with the final pass often wayward or intercepted and for seasoned Goodison-goers what came next was all too familiar.

Goalkeeper Jordan Pickford came to claim Oliver Norwood’s inswinging corner, United’s first, and although there was shoulder-to-shoulder contact with Callum Robinson there was not enough, VAR ultimately decided, to warrant a foul.

The ball going in off the apparently startled Mina’s shoulder merely added to Everton’s embarrassment.

The unmarked Richarlison epitomised Everton’s weakness in front of goal with a poor header 10 yards out.

Whereas United’s flexible back five encouraged their central defenders to regularly join the attack, Everton needed one of their holding midfielders of Morgan Schneiderlin and Fabian Delph to occasionally break the line.

Silva rectified that 10 minutes into the second half when he dropped Gylfi Sigurdsson into a deeper midfield role, switching to 4-4-2 after bringing on Alex Iwobi and Cenk Tosun for Bernard and Schneiderlin.

The hosts were re-energised and Wilder sent on former Toffees captain Phil Jagielka, who finally got to say goodbye to Goodison Park properly having left in the summer after 12 seasons, to add his vast experience to the rearguard action.

Silva took another gamble with 20 minutes to go, taking off right back Séamus Coleman with substitute Theo Walcott given instructions to hug the right touchline from an advanced position.

However, Everton’s haphazard 3-1-3-3 set-up only seemed to produce confusion and not penetration with the visitors’ tried-and-tested organisation allowing them to profit.

John Lundstram rolled a pass down the side and with Lucas Digne not tracking substitute Mousset and Pickford reluctant to come for the ball, the forward rolled a shot into an empty net.

That prompted hundreds of home fans to head for the exit and suddenly next week’s Carabao Cup tie in Sheffield – against Wednesday – takes on unnecessarily greater significance for Silva.

Norwich were brought back down to earth with a 2-0 defeat against Burnley at Turf Moor.

A week after their brilliant victory over Manchester City, the Canaries were undone by two early Chris Wood goals – his first of the season – and remain without a point on the road since returning to the Premier League.

The result brought Burnley a first victory since the opening day of the season and, for 24 hours at least, a place in the top 10.

Jeff Hendrick was rewarded for his late equaliser as a substitute against Brighton last weekend with a starting spot for the hosts while Norwich, unsurprisingly, were unchanged.

If ever there was a team geared up to dish out a reality check, it is surely Burnley, and the Clarets began with an intensity that Norwich could not match.

They could still have taken the lead, Teemu Pukki being denied by Nick Pope the only time the visitors made it out of their own half in the first 10 minutes, but it was no surprise when Wood headed in the opener from Ashley Westwood’s corner.

It was extremely poor defending from Norwich, who left the striker all alone a couple of yards out with no one on the near post.

The Norwich treatment room was already a busy place, and it gained another customer 12 minutes in when captain Alex Tettey appeared to suffer a muscle injury and was replaced by Moritz Leitner.

Two minutes later Burnley grabbed their second and again Norwich’s defenders seemed strangely unconcerned by Wood as he strode across the area to meet Dwight McNeil’s low cross with a sweeping finish.

McNeil was seeing a lot of the ball down the left and Burnley twice came close to a third but Tim Krul reacted well to keep out Jack Cork’s neat flick while Jamal Lewis prevented Hendrick heading into an empty net.

Norwich finally put a move together in the Burnley half in the 22nd minute and very nearly profited but Leitner’s 25-yard effort, which took a deflection off Cork, crashed against Pope’s post.

Ashley Barnes, who required a full change of kit after suffering a nasty cut in the opening minutes, tried to get in on the action four minutes later, meeting a cross with a well-struck volley that required a good block from Sam Byram.

Ibrahim Amadou was perhaps fortunate to get away with a yellow card for a lunging challenge on McNeil but the latter stages of the half saw improvements from Norwich and good play from Emiliano Buendia ended with a shot that was blocked by Ben Mee.

Buendia then curled an effort wide as Norwich sought a response at the start of the second half but Burnley looked just as likely to add a third.

Krul took exception to a sliding challenge from Matt Lowton and the pair briefly squared up but referee David Coote took no action other than awarding a free-kick.

A crisp one-two between Barnes and Wood saw the former curl a shot just past the angle, while Wood spurned a great chance for a hat-trick by shooting straight at Krul.

Coote then waved away appeals after Barnes appeared to be felled in the area by Ben Godfrey and decided against a VAR check.

Norwich just could not find the incisive move to break through the Burnley defence. Leitner was close again with a shot from 18 yards that flew just wide but the home side closed out the victory comfortably.