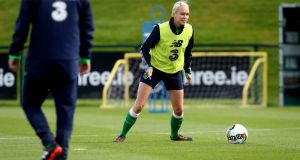 Teenage striker Heather Payne is Colin Bell’s only injury concern as the Republic of Ireland prepare to kick off their World Cup qualifying campaign against Northern Ireland in Lurgan Tuesday evening. The 17-year-old is recovering from a calf strain and a decision on her fitness will be made in the hours leading up to the match.

Megan Connolly misses the game due to educational commitments but Stephanie Roche returns from injury. Bell has the bulk of his more experienced players available as the Republic look to make a strong start in this game and next month’s in Slovakia, both against sides ranked below them, before taking on European Champions, the Netherlands, in November.

“It will be a tough game,” says Bell, “I don’t think there’s much between the teams, we’re away and it’s a derby so it will be a challenge but we’re geared to win, that’s always the case.

“We’ve had a bit of difficulty scoring goals but we have worked on that, on our build up play as well as set pieces, corner and free-kicks, because we want to create more opportunities. But the first priority has been to get stability, it’s very important that we are stable and compact as a team, and I think we have made a lot of progress on that.”

Ireland have conceded just three goals in seven games this year and they hope they can successfully break down a Northern Ireland side beaten 4-1 by Norway in the group’s opening game over the weekend.

“We’re total outsiders in the group,” says the manager. “Nobody is looking beyond Holland and Norway (beaten finalists in the European Championship four years ago) but that’s okay, we’re not quite where we want to be but we are improving and we’ll take it one game at a time in this campaign and see where it gets us.”

With Emma Byrne having retired, Manchester City’s Marie Hourihan takes over as Ireland’s number one. “Emma had a great career but we have good options in Marie, Amanda Budden (of Cork City) and young Amanda McQuillen (of Shelbourne). Marie’s got the experience, though, and she’s training in a professional environment so she’s got the shirt for now.”

1 On healing and wild hurling: The re-education of Diarmuid Lyng
2 Few, if any, have given as much to Munster as Garrett Fitzgerald
3 Triple bogey costs Rory McIlroy as Adam Scott prevails at Riviera
4 Solskjaer unable to say if Paul Pogba will play for Manchester United again
5 Wexford best the weather and Kilkenny on a mad day to be hurling
Real news has value SUBSCRIBE
Crossword Get access to over 6,000 interactive crosswords