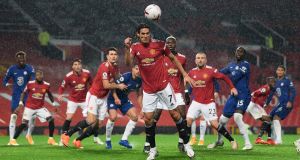 Edinson Cavani nearly scored with his first touch for Manchester United as Ole Gunnar Solskjaer’s men fought out a goalless draw with Chelsea in the pouring rain.

Having lost this season’s previous Premier League home matches to Crystal Palace and Tottenham in chastening fashion, the Red Devils were looking to make it third time lucky as their top-four rivals arrived at an empty Old Trafford.

But neither side fully mastered the challenging conditions in the north-west, where substitute Cavani went close to making a dream debut impact that would have compounded Chelsea’s exasperation at the lack of video assistant referee intervention.

Blues skipper Cesar Azpilicueta could not believe Harry Maguire got away with wrestling him to the ground in the box towards the end of a first half in which Edouard Mendy impressively denied Marcus Rashford and Juan Mata after nearly passing into his own net.

Solskjaer turned to Paul Pogba and deadline-day acquisition Cavani early in the second half, with the latter going close to finding the net seconds after coming on when flicking a Bruno Fernandes cross into the side-netting.

United pushed hard for a breakthrough but a first home victory of the season evaded them, with Mendy denying Rashford a dream end to a remarkable week in the closing stages.

The 22-year-old’s last-gasp effort secured Tuesday’s superb 2-1 win at Paris St Germain in the Champions League and eyebrows were raised at Solskjaer’s decision to move away from that selection and the 3-5-2 system that worked so well that night.

Instead it was Chelsea lining up with a three-man backline on a wet evening in which neither side was able to get a foothold on proceedings during an opening 20 minutes devoid of any notable goal threat.

Chelsea had United penned back but could not ask any serious questions, with the only potential early flashpoint seemingly missed by on-field officials and the VAR as Fernandes appeared to swipe at Jorginho’s face.

The first shot on target of the evening took 28 minutes to occur and David De Gea easily stopped Reece James’ attempt to catch him out at a free-kick, with Chelsea goalkeeper Mendy inexplicably coming closest for United.

The Blues’ new number one confidently turned and played a pass across his goal that was nearer to finding his own goal than its intended target, with the keeper breathing a sigh of relief when seeing it roll wide for a corner.

The goalkeepers got busier as the first half wore on, with De Gea making a comfortable save from Christian Pulisic and Mendy producing a superb stop with his feet to prevent Rashford netting on the break in the 35th minute.

Mendy again produced a fine save when Mata took aim from the edge of the box, although his United team-mates were more focused on what they felt was a penalty.

The VAR decided Rashford had not been fouled by N’Golo Kante after checking the incident and Chelsea also had penalty claims overlooked before half-time as Maguire got away with unceremoniously throwing Azpilicueta to the deck when heading away a free-kick.

The second period started in a similarly uneventful fashion to the first, with Solskjaer turning to Pogba and Cavani just 13 minutes after the restart.

The latter was close to making an immediate impact for his new club, sending a smart first-time flick into the side-netting when peeling away to meet a Fernandes cross.

Kai Havertz and Pulisic could not quite get on a whipped cross from impressive Chelsea right-back James, whose tough 50-50 with Pogba led to a break in play that took away building momentum.

Lampard turned to Tammy Abraham and Mason Mount in the search for a winner that looked most likely to go the hosts’ way as they probed, with Mason Greenwood thrown into the mix.

United would have snatched victory at the end had Mendy not produced a fantastic save to prevent Rashford bending a shot home from the edge of the box.

3 Malachy Clerkin’s sports books of the year for 2020