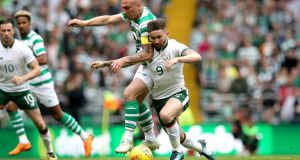 On the greenest of days in the East End of Glasgow, Irish men of various shades of the dominant colour in Scottish football gathered to honour the Celtic captain Scott Brown and, for the Republic of Ireland, to get themselves ready for the friendlies against France and USA that lie ahead.

It was an unforgettable occasion for Brown, and perhaps for the 46-year-old Celtic substitute Henrik Larsson. But it will also be recalled by those given a first taste of senior football in an Ireland jersey by Martin O’Neill.

Burke played for Shamrock Rovers at Sligo on Saturday night, then for his country at Parkhead less than 24 hours later. He became the first League of Ireland player to appear under O’Neill, who was impressed by Burke’s enthusiasm.

“I flew out on Sunday morning at 10am and got to Celtic Park around 12,” the 24-year-old Dubliner said.

“It was a long day with a tiring journey back from Sligo. I was in bed around 1am, up at 7am to get to Glasgow. I had to pinch myself when I got to Parkhead, to think that the night before I was playing in Sligo.”

Burke got half an hour after replacing Williams, his introduction part of raft of changes made by O’Neill.

Robinson is another for whom the day could be significant. The 23-year-old from Northampton, who plays among the Irish cluster at Preston North End, was in various England underage squads and came on the Irish radar about six months ago.

O’Neill spoke last week about international commitment and what it means. In replacing Jon Walters on the hour mark, Robinson was given an indication of that.

⚽| Ireland lead at Celtic Park thanks to this fine strike from Alan Browne! #COYBIG pic.twitter.com/VCUXh5J9CB

This was a testimonial – the Irish bus was applauded as it arrived – and there were reminders of that when Larsson appeared and Brown walked off to a standing ovation.

But there were other instances when Walters, and a few other players, revealed a rather different attitude.

It was visible even during the warm-up. Celtic strolled around trying to get Saturday’s Scottish Cup final out of their muscles, whereas the Ireland players took part in what, by the standards of your average friendly, was a fairly rigorous small-sided game.

By then there were plenty in the ground. Celtic’s historic achievement this season – the completion of a second consecutive domestic treble – is still in the air. It looked as if maybe 50,000 made it and how they roared when in the seconds before kick-off, both sides fell into a huddle.

The national anthem – and not the Scots’, even though Brown is a previous Scotland captain – had already been belted out. You’ll Never Walk Alone followed and it was given the full scarves-out treatment.

Brown’s name was met with more noise and there was also a rise in volume when James McClean was mentioned.

And then there was another name. These occasions carry other messages and the sight of the Liam Miller Fund on hoardings was one.

When the whistle blew it was obvious that McClean felt it all keenly. He chased down a lost cause after less than 60 seconds and his overall performance continued in that manner. He harried, tackled, hit the side-netting.

Some of that approach contributed to the Irish opener after just three minutes. Celtic were panicked into giving the ball away near their box and when it came to Alan Browne he picked out the far corner with a lovely side-foot curled shot.

The rhythm slowed as the first half wore on, though Colin Doyle made a smart save from Leigh Griffiths on the half-hour. That was a warning as 10 minutes later Griffiths was there to stab in an equaliser after Eboue Kouassi skipped away from Browne.

Inevitably, the second half brought substitutions and a slowing of the pace. Just before the Irish replacements, though, Callum O’Dowda wandered infield and lashed a shot from 20 yards that hit the crossbar and then the back of young Celtic goalkeeper Ross Doohan.

The lead was short-lived, Patrick Roberts getting Celtic’s second equaliser on 62 minutes. By then the Irish were virtually a different team to the first hour, so what O’Neill could learn from such a match is limited. He did, however, see players up close both in the game and away from it.

“Really strange,” he replied when asked about appearing in the opposition dressing room. He looked surprised to be informed that Monday marks the 15th anniversary of Celtic in Seville in the Uefa Cup final.

O’Neill noted a few names who had done well, given him food for thought, including that of one who was not here – Shane Supple. O’Neill saw Supple playing for Bohemians against Dundalk on Friday night and called him “imposing” and “half-decent”.

O’Neill did not go overboard, but Supple, like Burke and Scott “Broony” Brown has cause to remember this afternoon.