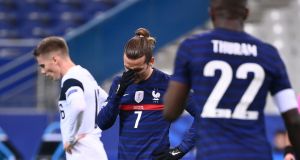 Antoine Griezmann during his team’s defeat to Finland in Paris. Photograph: Getty Images

France suffered a surprise 2-0 defeat to Finland in Paris on Wednesday night. Two goals in three minutes from Brentford’s Marcus Forss and Onni Valakari clinched victory for the visitors, who are ranked 55th in the world.

Finland recently beat Ireland, home and away, in the Uefa Nations League to leave them in second place in the group. Seven points ahead of Stephen Kenny’s team and one behind Wales.

The result brought France’s 12-match unbeaten streak come to an abrupt end, giving Finland their first win against Les Bleus, having lost all their previous eight encounters going into the game at the Stade de France.

The midfielder cancelled out Sergio Canales’ opener in their friendly in Amsterdam on Wednesday.

But there was an injury scare for Manchester City after defender Nathan Ake was forced off after just five minutes.

Real Betis’ Canales scored his first international goal after 18 minutes when Juventus striker Alvaro Morata slipped him in and he found the bottom corner from 16 yards.

Van de Beek levelled immediately after the break when Owen Wijndal’s cross went across the area and he drilled low past Unai Simon.

Sergio Ramos came on in the second half for Spain for his 176th international appearance, which made him the joint most capped European man with Gianluigi Buffon.

In Leipzig, Gian-Luca Waldschmidt’s early strike earned Germany a 1-0 victory in their friendly against the Czech Republic.

Michy Batshuayi’s brace earned Belgium a 2-1 win over Switzerland after Admir Mehmedi’s opener for the visitors.

Paulinho scored twice on his debut for Portugal, with Renato Sanches, Joao Felix and Emili Garcia’s own goal earning a comfortable win for the hosts.

1 Ireland 23 Georgia 10: How the Irish players rated
2 Ireland’s autumn of discontent continues with abysmal Georgia showing
3 No fireworks but Limerick get the job done against Galway
4 Ireland grind their way to grisly win over Georgia
5 Jim McGuinness: There is a way to save championship and make it competitive
Real news has value SUBSCRIBE
Crossword Get access to over 6,000 interactive crosswords