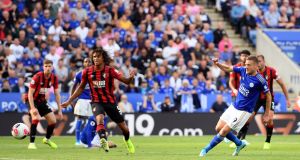 Leicester City striker Jamie Vardy was involved in all three goals as Brendan Rodgers’ side beat Bournemouth 3-1 in an end to end contest at the King Power Stadium in the Premier League on Saturday.

Vardy opened the scoring in the 12th minute when he took advantage of Bournemouth’s high line to break the offside trap and latch onto Ben Chilwell’s long ball, lobbing the ball over goalkeeper Aaron Ramsdale who was caught in no man’s land.

But the hosts’ lead lasted only three minutes after Bournemouth’s Ryan Fraser slipped the ball through to find striker Callum Wilson, whose shot from an acute angle beat Kasper Schmeichel and trickled into the goal at the far post.

Vardy then turned provider for Leicester’s second, beating Steve Cook on the right side of the box on the dribble before playing the ball across goal for midfielder Youri Tielemans who restored the lead with a simple tap in.

In the second half, Leicester’s persistence in the press paid off when James Maddison nicked the ball off the Bournemouth back line and the ball fell to Tielemans, whose pass back into the box was taken first time by Vardy to make it 3-1.

The result saw Leicester, who are yet to lose a league game this season, move temporarily up to third in the standings with eight points after four games.

Sebastian Haller and Andriy Yarmolenko were on target as West Ham United picked up their second win of the season with a 2-0 victory over promoted Norwich City on Saturday.

French forward Haller, signed from Eintracht Frankfurt in the close season, put the Hammers ahead in the 24th minute, sliding the ball home from close range after a wonderful cross from Arthur Masuaku.

The goal makes it three goals in two games for the club’s record £45 million signing who opened his account with a brace at Watford last week.

Norwich, who have now suffered three defeats in their opening four games, should have pulled level in the 31st minute but Todd Cantwell put a header from close range wide, after a superb run down the flank from Max Aarons

Ukraine international Yarmolenko doubled the lead in emphatic fashion with a fine left-foot volley from outside the box in the 56th minute.

Robert Snodgrass should have added a third after being slipped in by Felipe Anderson but his effort was kept out by Norwich keeper Tim Krul.

After three successive Premier League defeats under manager Javi Gracia, Watford stopped the rot by hanging on for their first point of the season in a 1-1 draw at Newcastle United on Saturday.

Will Hughes took just 78 seconds to atone for his embarrassing miss on the goalline the previous weekend, slotting home after Tom Cleverley’s shot deflected off a defender into his path.

The goal was the second quickest Watford have ever scored in the Premier League and eased visiting nerves as they sought to avoid their worst start to a season for 85 years.

Newcastle took most of the first half to find any sort of attacking rhythm but equalised just before the break through Fabian Schar, who pounced on a loose ball to beat Ben Foster with a left-foot shot from inside the area.

Both sides could have won it after the break when Joelinton thought he should have been awarded a penalty and Watford substitute Isaac Success was denied by keeper Martin Dubravka.

Gracia, who is under pressure with his side still rooted to the bottom of the table, chose to keep record signing Ismaila Sarr on the bench.

Crystal Palace finally scored in front of their own fans at Selhurst Park as Jordan Ayew secured a 1-0 win in the Premier League on Saturday against an Aston Villa side hampered by the 54th-minute dismissal of Trezeguet.

But Villa were denied an equaliser in the final seconds when Henri Lansbury bundled the ball into the net but referee Kevin Friend disallowed the goal for an earlier dive by Jack Grealish, who was booked.

After two successive goalless draws, Palace looked in danger of further frustration until Ayew finally found a way to beat Tom Heaton on 73 minutes, getting on the end of a James McArthur cross to fire home.

Until that point there seemed no way past Villa’s keeper, who twice tipped over free kicks from Luka Milivojevic either side of the break.

McArthur also flashed a shot over Heaton’s bar as Palace demonstrated their familiar problems up front but the key moment came after the break when Trezeguet was dismissed for crashing into Wilfried Zaha.

Villa’s task had been hard enough with 11 men but with 10 they looked permanently stretched and Ayew took full advantage on 73 minutes, turning inside from the left to fire a right-foot shot into the net.