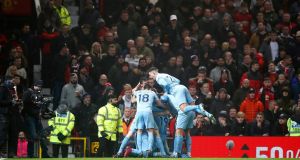 Burnley have a famous first win at Manchester United since 1962 and Ole Gunnar Solskjær’s side must again regroup somehow. This was a defeat that speaks of their callowness and inability to turn possession into goals.

Burnley were sharper at the business end of the pitch leaving United to rue a chance to close the gap to fourth-placed Chelsea to three points. Instead the gap is six and United’s one-step forward, one-step back form continues.

Solskjær spoke before the game of the need to bounce back from the disappointment at Anfield and a slick move involving Andreas Pereira, Anthony Martial and Juan Mata that ended with a Fred shot made it look like his side meant business.

This augured well, but the sight of Martial limping after falling innocuously to the turf was not what United wanted to see, especially given Marcus Rashford’s long-term injury. However he recovered and rejoined United’s promising opening.

Daniel James slipped in along the left and won the first corner. Next Brandon Williams switched the ball to Aaron Wan-Bissaka from the same corridor, whose cross deserved better control from Pereira.

As they did in last month’s reverse fixture United were controlling the ball and the contest. Dyche’s men seemed content to sit deep and back themselves to defend better than United could attack.

When Solskjær’s side picked up the pace Burnley struggled. Mata fed Wan-Bissaka who played in another dangerous ball. Once more United were unlucky not to take the lead.

Dyche was constantly gesticulating at his players, but given their tactics were presumably his this was a touch mystifying. The only peril United were in at this juncture was of being complacent but when Mata then Fred took aim at Nick Pope’s goal this seemed unlikely.

Moments later they were warned, though, when Chris Wood was able to take aim following a free-kick punted into United’s area by Dwight McNeil that was headed on by Ben Mee. While the No 9 could not score David De Gea was furious at his defence, whose aerial vulnerability led to Liverpool’s opener at the weekend.

There was an equal lack of focus when Mata hit a shot from close range against his other leg: a surprise from a technically accomplished footballer. Far better was when Wan-Bissaka once more pinged the ball in and James rose and his header was tipped over by Pope.

Then, Nemanja Matic’s diagonal ball was allowed to run past by Mata and suddenly Martial had the goal before him. But a heavy touch allowed Charlie Taylor to intervene and so the Frenchman spurned the game’s clearest chance.

Now Burnley struck with a route-one special. Ashley Westwood pinged in a free-kick from halfway, Mee beat Matic to the header and Wood beat De Gea. Having been on the ropes all half here was a classic one-two counter that had Burnley fans gleefully singing about “anti-football”.

By the interval there had been more anti-Glazer and Woodward chants from the Stretford End in protest at the owners and executive vice-chairman, respectively. Solskjær’s name had been sung in praise. Now, he had serious work to do.

He reacted by taking off the misfiring Pereira for Mason Greenwood for the second half. He then saw Williams take out Mee who inadvertently felled De Gea. The latter two were able to recover but the question was if United could find a spark so far missing in front of goal.

Burnley were looking confident. Taylor and Jack Cork exchanged passes near United’s right corner flag, hemming them in. The sense was that having gone ahead the Clarets would fight even more to keep the opponent out.

James has not scored since August and has failed to be a consistent creative factor all season. The latest example came when he again breached Burnley’s backline only to produce an aimless pass that allowed an easy clearance.

There was nothing simple about Jay Rodriguez’s second. With Harry Maguire off the pace he fashioned a one-two with Wood before firing in a finish that ricocheted in off De Gea’s bar. Cut to Solskjær rooted to his seat and the sense that United were slipping into disarray.

“Stand up if you hate Glazers” chanted the Stretford End. On the pitch a Greenwood turn drew a yellow card for Taylor before Solskjær introduced Shaw and Jesse Lingard for Williams and James. Despite a few shots and a disallowed Luke Shaw goal, United’s lack of ruthlessness had told. – Guardian