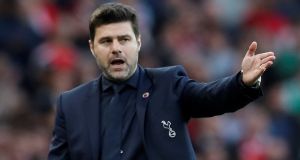 Tottenham manager Mauricio Pochettino: “When the people celebrate like this, it’s because people respect you and see you as a big club.” Photograph: David Klein/Reuters

Mauricio Pochettino believes that celebratory dressing-room selfies ought to be posted only after a trophy win. The Tottenham manager offered his view after being told of how Arsenal had gloried in their 4-2 derby victory over his team on Sunday.

Bernd Leno uploaded a picture of the team celebrating in the dressing room; Aaron Ramsey used the hashtag northlondonisred; and Sokratis Papastathopoulos shared a photograph of himself standing over Harry Kane.

Pochettino was careful not to criticise Arsenal, making the point that he was talking purely about his own mentality, and he preferred to take his rival’s celebrations as a compliment; a sign that Spurs were a scalp worth having. Pochettino had spoken last week of the importance of the humility that his players had shown after their 3-1 win over Chelsea the previous Saturday.

“Personally, I don’t like,” Pochettino said, when asked about dressing-room selfies. “If you win a trophy, like I did when I was a player, it is a moment to celebrate. This is my mentality. I don’t want to say it’s right or wrong. I love to celebrate in private and not make it public. If you win, celebrate and show the fans you are happy – but when you win a trophy, when you win something special.

“Arsenal, Tottenham, we are 30 points each [in the Premier League]. There are still a lot of things to play for. To be sporting enemies is a fantastic thing but I don’t want to criticise what people want to do. What it shows is the respect that they have for us. When the people celebrate like this, it’s because people respect you and see you as a big club. To get the respect is the most important thing or the first step.”

To further illustrate his point, Pochettino told a story from Anfield, where Tottenham’s chief scout, Steve Hitchin, had watched the derby between Liverpool and Everton, which kicked off shortly after the Arsenal-Spurs game finished.

“Steve was watching our game before at Anfield and when Arsenal scored the third goal, all the Liverpool fans celebrated, like Arsenal celebrated afterwards,” Pochettino said. “It’s clear we are doing something good. That respect – I love it. I love it when the people celebrate when they beat you. I don’t like it when the people don’t celebrate because it’s normal to beat Tottenham.”

Pochettino’s anecdote prompted a question – what was the club’s chief scout doing at the Merseyside derby? “Be careful,” he replied, with a smile. “There is maybe a big surprise in January.”

Pochettino digressed into a broader speech about the egotism that underpins the modern-day desire to share personal experiences on social media. “I go with my dog to Trent Park and the most important thing [these days] is not to share the walk with your dog,” he said. “It’s to share with your followers. I accept it is a new world, that the people need this because it is how you feed yourself, your ego. I am of the older generation. I accept the new technology but I try to keep a bit away from that.”

Pochettino is preparing for Wednesday night’s visit of Southampton, his former club, who will be under the caretaker charge of Kelvin Davis, his one-time captain. Danny Rose, who is fit again after a groin injury, is in line for his first start since October 6th. Kieran Trippier is also fit after groin trouble. Jan Vertonghen is suspended.