CEO does not accept claims of arrogance among club officials 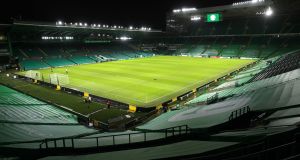 A general view of Celtic Park before the Scottish Premiership match between Celtic and Hibernian. Photograph: Jane Barlow/PA Wire

Chief executive Peter Lawwell has admitted Celtic’s controversial decision to go to Dubai was “a mistake” and has apologised to the club’s fans.

The Parkhead club had confirmed Christopher Jullien tested positive but all others and staff members were negative after being checked following their return to Scotland from a training camp last Friday.

However, 13 other players, manager Neil Lennon and assistant John Kennedy were deemed to be close contacts and had to join the French defender in self-isolation.

Scottish first minister Nicola Sturgeon questioned whether the trip was essential and revealed doubts “based on some pictures I’ve seen whether adherence to bubble rules was strict enough”.

Celtic fans themselves were leading the widespread criticism and amid a furore, it was a makeshift Hoops side which drew 1-1 at home with Hibernian on Monday night.

Speaking in an in-house interview on the club’s official website Lawwell addressed the issue and said: “It has been an extremely difficult few days and on reflection, looking back and with hindsight and looking at the outcome of the trip, clearly it was a mistake and for that I profoundly apologise to our supporters.

“We left here and the rationale for the camp was very much with the best intentions.

“Things haven’t gone the way we wanted to and the outcome is clearly very regrettable.”

The draw against Hibs did little to lift the mood of the Celtic fans as it left them 21 points behind Rangers at the top of the Scottish Premiership with three games in hand and with their bid for 10-in-a-row in considerable jeopardy.

Lawwell expanded on the thinking behind the mid-season break abroad.

He said: “If you look back over the last four years, going to the camp in Dubai has been extremely successful.

“What we planned to do was take them again to these facilities, which are world-class, after a very hectic programme in November and December which has in the past proven to be a great benefit in terms of performance after January, to get to that performance level again.

“In terms of the facts surrounding the trip, we decided in November to go and were permitted to go.

“Clearly the landscape has changed significantly, particularly in the run-up of going to Dubai, particularly the infection rate and whatever.

“But at the time, Dubai was still part of the green corridor for the UK and Scottish travel right up until we left.

“We were deploying the same protocols that we have done since the bubble started in June and up until this stage we haven’t had one positive.

“The protocols are robust and proven and were put in place for the Dubai trip.

“Overall, the decision to go was for the right reasons, for performance and, of course, at the end of the day the outcome of that has been really disappointing.”

Lawwell was asked about accusations of arrogance and the questioning of the club’s values.

He said: “I don’t see that, I don’t agree with that and I think it is actually unfair.

“I do understand people questioning the decision to go. This club, the values and standards we have in terms of integrity, respect and humility are there.

“Again, looking at the pandemic, it is fair to say that we have done an awful lot as a club.

“The attitude we have to it has been responsible in terms of our record, and how we have been protecting our people and our players, how we have really been at the forefront of getting Scottish football back to training and playing.

“And through our foundation we have donated over £1 million to those have been worst affected by this horrendous pandemic.

“So I think it is unfair. We have made a mistake and we apologise for that but the club that the fans would like to have and have had, is here.”