Manchester City start as they finished as Arsenal outclassed 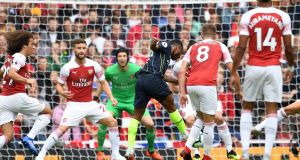 If nothing else, at least Unai Emery can console himself with the thought that not every opponent will be as daunting as Manchester City. The fixture list was unkind for the new Arsenal manager and Pep Guardiola’s team duly continued where they left off last season. A new season, yet the same old story, for both these sides and another reminder of what we should probably have already known, namely that it will require an exceptional effort from any other team to deny City another Premier League title.

By the time it was all done, Emery had become the first Arsenal manager to lose his opening game since Terry Neill in 1976. It was the first time since 1936 that City have recorded back-to-back wins at Arsenal and perhaps the most startling part, as far as the rest of the league is concerned, is that it was achieved with Kevin de Bruyne and Leroy Sane restricted to substitute roles, no place for Vincent Kompany or Nicolas Otamendi and with David Silva working on his fitness back in Manchester.

For now at least, Guardiola is also going through a period of experimentation. Bernardo Silva justified his selection with a peach of a goal. Raheem Sterling’s goal came from the left wing, switching flanks so Riyad Mahrez could be accommodated on the right. The fit-again Bernard Mendy was among the game’s outstanding performers and, on this evidence, the new central defensive partnership of John Stones and Aymeric Laporte will take some shifting. Guardiola’s team did not reach their most exhilarating peaks but they still won with something to spare and the awkward truth, in these getting-to-know-you stages with Emery, is that it was not always easy to understand what Arsene Wenger’s successor was thinking.

Arsenal’s supporters will have known their new manager wanted to do things differently to the last man. What they perhaps could not have imagined was that Emery would start with Aaron Ramsey operating as a central attacker, Pierre-Emerick Aubameyang on the right of the front three and Mesut Ozil in a more withdrawn role. Ozil had swapped positions with Henrikh Mkhitaryan before half-time and, ten minutes into the second half, Emery decided it was time to put an orthodox striker, Alexandre Lacazette, in Ramsey’s position. It was not the most coherent plan and it was tempting to wonder whether the crowd would have been if Wenger had been responsible for these tactics. A new manager always gets a bit of leeway and that is just as well because it would have been intriguing to see the reaction if the previous one had come up with this plan.

At least Emery will have a better idea now why these side were separated by 37 points last season and the improvements that are needed, first and foremost, in his team’s defence. Arsenal’s centre-backs here were Sokratis and Shkodran Mustafi and they frequently looked vulnerable. Bellerin found Sterling a difficult opponent and Ainsley Maitland-Niles, deputising for Nacho Monreal at left-back, lasted only 35 minutes before picking up an injury of his own. That meant Stephan Lichsteiner, a right-back by trade, coming off the bench to join an experimental back line. Emery, in fairness, needs some time to get a more settled look.

Plainly, though, he will also have to analyse whether it is time for Petr Cech to be eased out of the team. Cech did produce a splendid save in the second half to keep out Sergio Aguero in a one-on-one breakaway but he was also badly at fault for the opening goal and, not for the first time, there was clear evidence that he is no longer the goalkeeper he once was. Arsenal signed Bernd Leno for £22.5m from Bayer Leverkusen in the summer because of this exact point and, unfortunately for Cech, his frailties are no longer a surprise to regular Arsenal-watchers.

The only possible defence for the opening goal was that Cech was slightly unsighted as Sterling, cutting in from the left, eluded a couple of wishy-washy challenges from Hector Bellerin and Matteo Guendouzi and fired a right-foot shot through a congested penalty area. The ball was near enough to Cech to be saved but he watched it into the net. Cech is entitled to think his team-mates should have done more to keep out the shot but there was an even more startling moment, midway through the first half, when a pass was played back to the goalkeeper and he tried to switch play to the right, got it horribly wrong and nearly put the ball in his own net. He was lucky to get away with conceding a corner, rather than a comedic own-goal, and on the next occasion he found one of his team-mates there were ironic cheers.

Guendouzi’s selection was a bold move on Emery’s part and it was a difficult introduction for the 19-year-old with the David Luiz hairstyle. Guendouzi was signed in the summer from Lorient in the French second division, where it is fair to assume the opponents are not of City’s quality. He worked diligently but it was also his mistake that let Aguero run free. Cech saved that one but in City’s next attack Mendy exchanged passes with Sterling before crossing from the left. Silva swivelled and sent an elegant, left-foot shot into the top corner, still rising as it hit the net.