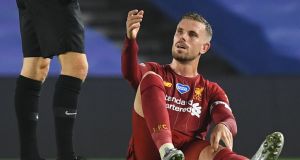 Jürgen Klopp has confirmed Jordan Henderson will miss the rest of the season through injury but will lift the Premier League trophy at Liverpool’s final home game against Chelsea.

Henderson injured his left knee during Liverpool’s 3-1 win at Brighton on Wednesday to leave Klopp fearing a lengthy lay-off that could impact on the 2020-21 campaign. The Liverpool manager admits it came as a “big relief” when scans revealed surgery would not be required, and he expects the influential captain to be available for the start of the title defence.

“Hendo is the best possible of all bad news,” Klopp said. “It is a knee injury but no surgery is needed. He will not play any more this season but I am pretty positive he will start with us the new season. It is not cool but it is the best news we could get.

“Hendo is a quick healer and he will be back soon. It was an awful moment when he went down and left the pitch, we knew immediately. In Germany you would say he is an animal – Hendo fights with everything and if he has pain he will never tell you. He can really deal well with pain so in this moment it was a complete mood killer.”

Klopp admits Henderson could have missed Liverpool receiving the Premier League trophy at Anfield had he required surgery.

Instead the midfielder will be in rehab when Frank Lampard’s side visit on July 22nd and available to add the Premier League to the Champions League, Club World Cup and Uefa Super Cup trophies he has lifted in the past 14 months.

“Hendo will be there and he will wear the match kit and everything will be fine,” Klopp said before Saturday’s game against Burnley.

“When we knew the injury was not as serious as we first thought it was a big relief for all of us, a big relief because we really thought – for the role he played in the last few years until now –- he deserves to be in that spot at that moment [when the trophy is presented].

“But life is like it is. If he would have had the surgery he would have been in hospital and it would have been difficult. But now – no surgery needed, rehab starts immediately and in a few weeks training and playing again. All the boys want him to be there. One of the first things I heard after we won the league was Virgil [Van Dijk] telling Hendo: ‘You can do the shuffle again!’ I am not sure he will be able to do the shuffle now but that is the biggest problem now.”