Jon Walters set for loan move to the Championship

Meanwhile, Kevin O’Connor has moved on loan from Preston to Crewe Alexandra 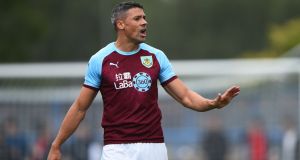 Jon Walters looks set to return to return to Ipswich Town on a season long loan before the end of the week with the 34 year-old’s former club in talks with Burnley about the terms of a deal as manager Paul Hurst tried to add experience and more of a physical presence to his attack.

The Republic of Ireland international who made almost 150 appearances for the club, scoring more than 30 goals, in a three-and-a-half year stint that ended eight years ago, has barely featured for Burnley since joining in the summer of 2017 and admitted towards the end of last season that he would almost certainly have to move on in order to secure some first team football.

He is keen to continue on in international football and manager Martin O’Neill has suggested that, given his age, he is one of those who is in particular need of game time.

Preston’s turnover of Irish players continues with the Championship club having loaned out former Cork City left back Kevin O’Connor to League Two side Crewe Alexander until the start of January.

Like a few others at the club, O’Connor fell out of favour not long after the departure of Simon Grayson and spent the second half of last season at Fleetwood Town. Daryl Horgan and Eoin Doyle had already departed and Andy Boyle is expected to follow before Friday’s deadline with the centre back apparently attracting interest from both Motherwell and Notts County.

Shamrock Rovers boss, Stephen Bradley, meanwhile, says that young goalkeeper Gavin Bazunu’s move away has not been completed and that talks are continuing with two Premier League clubs.

“There’s no secret that everyone wants him,” said Bradley after Tuesday night’s win at Dundalk where the 16-year-old was on the bench, “and we’re right down the line in terms of getting something done. Right now, there’s absolutely nothing agreed or signed but we’re talking to two clubs and both have shown a big, big interest in him.”

Manchester City, who had been reported to have signed the teenager for a fee of €400,000 are one of the clubs while Tottenham Hotspur are understood to be the other.

Asked when he thought the player’s future would be resolved, Bradley replied: “I’d imagine in the next month or so. But, again, it’s down to Gavin, he needs to get a good feel for what he decides, and the club.”