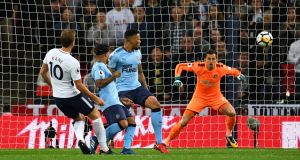 Tottenham overcame a nervy night at Wembley to book their Champions League place for next season with a 1-0 win over Newcastle.

Harry Kane’s 50th-minute goal, his 28th of the Premier League season, was enough for Spurs after Chelsea were held to a 1-1 draw by Huddersfield.

That means, with one game to play, Mauricio Pochettino’s men are third and four points clear of their London rivals, sealing a third successive year in Europe’s elite club competition.

It is a particularly impressive achievement this year, given the spending power of the other big six teams, but it did not come without tension at Wembley on a night when Newcastle gave them a fright.

Jonjo Shelvey hit the post in the first half while they missed good chances throughout.

One man who does know where the back of the net is, though, is Kane and while he may miss out on the Golden Boot his strike helped seal a much bigger prize for his side.

The Gunners could still end the season pointless away from home in 2018 after Vardy netted his sixth goal in his last six games against Wenger to help condemn them to defeat.

Kelechi Iheanacho opened the scoring in the first half just 92 seconds before Konstantinos Mavropanos was dismissed for the visitors.

Pierre-Emerick Aubameyang did level but Vardy’s penalty and Riyad Mahrez’s late goal settled the game, leaving the Gunners with the same away record as relegated West Brom ahead of Sunday’s finale at Huddersfield.

Victory at least eased some of the growing pressure on Leicester boss Claude Puel, but it was just the Foxes’ fifth win in 20 Premier League games.

Yaya Toure bade farewell to the Etihad Stadium as champions Manchester City set a hat-trick of Premier League records in a routine 3-1 win over Brighton.

Veteran midfielder Toure was made captain for his final home appearance and goals from Danilo, Bernardo Silva and Fernandinho, cancelling out a Leonardo Ulloa effort, ensured he finished on the winning side.

Records tumbled as City took their goals tally for the campaign to 105, their points total to 97 and their number of wins to 31, eclipsing previous best marks set by Chelsea.

Leroy Sane also shone, setting up all three goals, but the occasion belonged to Toure as the club celebrated the Ivorian’s outstanding service over the past eight years.

Toure was recalled for his first Premier League start of the season and regular captain Vincent Kompany gave up the armband for the night.

He played 85 minutes before leaving to a huge ovation having been in the thick of the action throughout. Like the Toure of old, he frequently looked to drive City forward or pick up possession on the edge of the box. He was urged to shoot from early on as the fans longed for a farewell goal but that was not to be, despite a late chance.