Gloom is lifted over Manchester United with opening day win 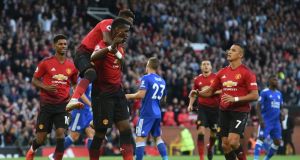 Was that, very briefly, a smile on José Mourinho’s face? Blink, and you might have missed it, but at least Manchester United have begun the new season with a victory and after all the sullenness of pre-season, the complaints about the club’s transfer business and the overwhelming suspicion that something is not right, this was a reminder how winning football matches can make everything feel so much better. For now at least, Old Trafford feels like a happy place again.

They struggled at times to impose themselves against a robust and attacking Leicester side and it was not the kind of performance to make you think they look like returning the Premier League trophy to Old Trafford for the first time since Alex Ferguson’s retirement season. At the same time, it was still encouraging in other ways. Paul Pogba carried on where he left off in the World Cup. Fred, the £52m acquisition from Shakhtar Donetsk, had a competent debut and Luke Shaw’s confidence should be soothed from scoring the 82nd-minute goal that ultimately decided the match.

Jamie Vardy, one of Leicester’s substitutes, ensured a nervous finale with a stoppage-time goal but the away team always had their work cut out after Pogba’s third-minute penalty.

Pogba’s selection came as a surprise given that he returned from his post-World Cup break only four days earlier but that, perhaps, is the attitude that Mourinho wants to see from his most expensive player. Pogba was wearing the captain’s armband in the absence of Antonio Valencia and, after one of the slowest run-ups imaginable, it was an elegantly struck penalty to send the ball beyond Kasper Schmeichel into the top corner.

The goal was a personal ordeal for Daniel Amartey, the Leicester player responsible for giving away the penalty, with only 75 seconds on the clock when the referee, Andre Marriner, was left with a relatively straightforward decision. Wes Morgan was in the way to block Alexis Sánchez’s seemingly innocuous shot but when the ball ricocheted Amartey’s way he improvised by jutting out his arm to bring it under control. It was a silly and costly mistake and in those difficult early stages, with United pumped up and dominating the opening quarter of an hour, the band of travelling Leicester supporters might have been excused for wondering whether it was going to be a harrowing evening.

Instead the visiting players shook their heads clear and the pattern of the game had changed considerably before half-time. Leicester have not started a top-division season with an away win since beating Aston Villa in 1933. They arrived here with only one opening-day victory from their previous nine attempts and Amartey’s early lapse was not the only occasion when they looked apprehensive in the opening exchanges. As the first half wore on, however, James Maddison began to show why Leicester had paid £24m to sign him from Norwich City. Demarai Gray seemed keen to explore the theory that Matteo Darmian, deputising for Valencia in United’s right-back slot, might be vulnerable and, before the interval, Leicester’s supporters could even be heard taunting Mourinho with the “Park the bus“ song.

In truth, it was not quite that troublesome for the home team but, equally, the crowd would have been entitled to expect more from their players. Marcus Rashford, in particular, looked rusty at time. Sánchez has rarely shown Old Trafford the gifts he once displayed for Arsenal and perhaps it was inevitable that United would endure some difficult moments at the back bearing in mind their defence was made up of four players who were largely used as understudies last season.

Harry Maguire, one of the centre-backs Mourinho wanted to recruit over the summer, was on the opposition team, reminding us why Gareth Southgate eulogised in the World Cup about the player’s knack of “getting his bonce on everything.” Southgate was here, too, and no doubt will be pleased to see Luke Shaw returning to Mourinho’s team. Yet the attention of the England manager might also have been drawn to the opposition left-back, Ben Chilwell, who had a fine game.

For United, Pogba was the outstanding player – the nutmeg on Ricardo Pereira, just after the hour, was a joy – while Andreas Pereira, back from his loan arrangement with Valencia, fitted neatly into their midfield. Overall, though, Mourinho’s team looked what they probably are: a work in progress, and a long way behind Manchester City when it comes to fluent passing and controlled attacking play.

David de Gea had to keep out a decent effort from Maddison and Leicester could also reflect on the chance that Kelechi Iheanacho skimmed just wide of the far post. Too often, United were let down by an errant pass, particularly in the final third of the pitch, and that continued after Mourinho decided to bring on Romelu Lukaku midway through the second half. Lukaku was not deemed fully fit to start, as one of the players given extra time off to recover from the World Cup, but it was obvious United needed more from their front players and it needed a fine save from Schmeichel to deny him a goal.

Shaw had one awkward moment when Vardy dispossessed him close to his own penalty area but United’s left-back got away with that one and made amends shortly afterwards by hooking a diagonal shot past Schmeichel from Juan Mata’s pass. Vardy’s goal was a close-range header after Ricardo’s cross came back off the far post but Leicester could not conjure up any more late drama. – Guardian service