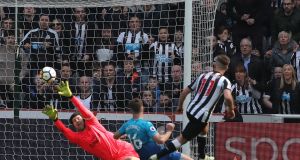 As Rafael Benítez strode on to the pitch and earned a richly deserved standing ovation, yet another Arsenal inquest was about to begin.

At the end of an afternoon when, courtesy of a fourth straight win, Benítez’s Newcastle United emphatically banished any lingering relegation fears and the debate about Jonjo Shelvey’s England candidature was re-opened, Arsène Wenger once again reached for his metaphorical tin helmet.

They may be looking forward to a Europe League semi-final against Atlético Madrid but this was Arsenal’s fifth straight Premier League away defeat and they have still to collect a single point on the domestic road during 2018.

In mitigation, their Europa League quarter-final triumph at CSKA Moscow on Thursday night was followed by a 5am landing at Luton airport the next morning. That rude awakening left Wenger’s players fatigued and his team in need of the sort of refreshment which facilitated a Premier League debut for the 18-year-old attacking midfielder Joe Willock.

Not that Arsenal initially seemed either overly tired or missing the absent Mesut Özil – given the day off here. Instead Alexandre Lacazette volleyed them into an early lead at the end of a wonderfully fluent attacking move also featuring Shkodran Mustafi’s 60-yard pass and Pierre-Emerick Aubameyang’s adhesive control and intelligent square ball.

It was Aubameyang’s second visit to the north-east, the first having come six years ago when he played Olympic football for Gabon at St James’ Park. In 2012 Aubameyang and friends limbered up with a friendly at nearby Northern League Heaton Stannington where he caused quite a stir by arriving in a pair of £2,500 Swarovski crystal-encrusted trainers.

Ayoze Pérez – who cost Newcastle a relatively modest £1.5 million when he joined from Tenerife – is unlikely to ever command the £56 million that Arsenal paid Borussia Dortmund for Aubameyang but, almost imperceptibly, the young Spaniard has grown into what initially seemed an unnatural No 10 role in Benítez’s hallmark 4-2-3-1 formation.

So much so that Pérez has now scored three times in the last three games, with the latest pulling Newcastle right back into things here. In some respects the equaliser was almost a carbon copy of Lacazette’s opener. It, too, began with a fine long delivery – this time over 50 yards from Shelvey. Once Dwight Gayle had brought Shelvey’s pass under seamless control and Mustafi negligently stood off, the striker fed DeAndre Yedlin whose superb low cross from the right was met by Pérez’s right foot before arrowing beyond Petr Cech.

Martin Dubravka’s arrival on loan from Sparta Prague in January has been a key factor behind Newcastle’s recent renaissance – significantly Lacazette’s goal was the first the Slovakia goalkeeper had conceded at St James’ Park – but, bar a momentary brain freeze on Willock’s part he would surely have been beaten again just before half time.

When Mo Diame slipped, Lacazette was gifted possession and the striker’s pass seemed to have cued the teenager up for a memorable goal. Poor Willock; perhaps overwhelmed by the moment he got his feet in an awful tangle and a glorious chance evaporated.

By then it had turned into an intriguing tactical duel between Arsenal’s slick possession game – featuring the odd encouragingly mature cameo from Willock before his replacement by Danny Welbeck – and the counter-attacking strategy which has enabled Benítez to over-achieve this season.

The vastly improved Jamaal Lascelles and Paul Dummett have been influential, while Shelvey’s defence-splitting contribution alongside the quietly influential Diame has frequently changed games. Against Arsenal he did much to suggest that Gareth Southgate is wrong to continue turning a blind eye to his England candidacy. It is unlikely that the unusually subdued Mohamed Elneny would relish facing Shelvey and Diame every week.

Indeed, Arsenal were not enjoying a second half which saw Islam Slimani, on for Gayle, create Newcastle’s second goal. It began with Slimani heading across for the area, leaving Pérez to contribute a clever dummy and neat flick and Matt Ritchie to lift his shot over Cech. Nacho Monreal will not relish watching the replays.

Creating havoc, Slimani subsequently emphasised his impact by creating another opening which resulted in Kenedy hitting the bar. – Guardian service

1 Wales cry foul over Furlong’s scrum technique
2 Gerry Thornley: England primed to show their best against Ireland
3 Should fans be allowed drink in the stand at sporting events?
4 Mako Vunipola to miss Ireland game for family reasons
5 Frank Lampard says Harry Maguire should have been sent off
Real news has value SUBSCRIBE