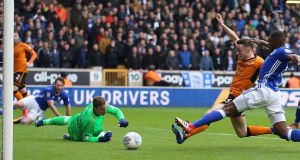 Wolves celebrated their promotion to the Premier League in style with a 2-0 win against 10-man Birmingham at Molineux.

Diogo Jota’s 17th goal of the season – and his third in the last four games – put Nuno Espirito Santo’s side on course for victory after 21 minutes before substitute Benik Afobe made the game safe three minutes from time.

Birmingham were reduced to 10 men in the 52nd minute when Harlee Dean was sent off for his challenge on Helder Costa.

Wolves had already secured promotion before kick-off thanks to Fulham only managing to draw against Brentford on Saturday and are now on the verge of winning the title as well.

One more point would make the title certain – but their superior goal difference over second-placed Cardiff means that the crown is effectively theirs already.

They are only two points clear of the relegation zone after hitting a poor run at the wrong time. Birmingham have collected only one point from their last three games, having won their previous three.

Wolves were indebted to the reflexes of goalkeeper John Ruddy for preventing Birmingham from taking the lead in the 11th minute.

Lukas Jutkiewicz prodded a pass through the Wolves defence and the ball was collected by Maxime Colin.

Colin only had Ruddy to beat from 12 yards but saw his shot beaten away and when the re-bound flew straight back to Colin, his second attempt was also saved by Ruddy.

Wolves finally mounted a threat of their own when Ruben Neves tried his luck from 30 yards only to see his shot comfortably dealt with by goalkeeper David Stockdale.

But, while Stockdale was able to deny Neves, he was powerless to prevent Jota breaking the deadlock four minutes later.

Republic of Ireland defender Matt Doherty crossed from the right and his centre into the six yard box was an invitation that Jota was not going to turn down as he bundled the ball into the net from close range.

Leo Bonatini had an excellent chance to double their advantage 10 minutes before half-time when he was picked out by Costa, only to be denied by Stockdale.

Stockdale came to Birmingham’s rescue again at the start of the second half – saving from Jota following his surging run into the penalty area before City’s task then became even harder when Dean was dismissed for bringing down Costa as he raced towards the penalty area.

To their credit, Birmingham rallied after the red card with Jutkiewicz forcing Ruddy to tip his rising drive over the bar before substitute Jacques Maghoma had a shot blocked by Barry Douglas in the 64th minute.

Jutkiewicz was then denied by Ruddy five minutes from time before Afobe ended their challenge – lifting the ball over Stockdale after a pass from Douglas.