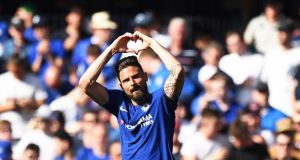 This revival feels unlikely. It had taken the hosts half an hour to rouse themselves properly, their initial ambitions having been limited to containing the visitors’ considerable threat. Any hopes that Liverpool might be emotionally spent after their midweek exertions in Rome, and with thoughts already drifting to Kiev, had been dispelled both in team selection and approach.

Jürgen Klopp’s side had poured forward, Roberto Firmino setting the tone with a shot at Thibaut Courtois’ near-post from Trent Alexander-Arnold’s cleverly angled pass, with Sadio Mané constantly testing the goalkeeper. Courtois did well to block or smother the Senegalese’s flurry of attempts but, in weathering that squall, Chelsea did at least find some rhythm of their own.

They duly prised out a lead as Victor Moses, once a loanee at Liverpool and excellent here, was granted time to turn on to his left foot and arc over a centre. Olivier Giroud, in between Virgil van Dijk and Dejan Lovren, sprung to guide his header into the far corner before celebrating manically with David Luiz in the seats behind the home dug-out. The Frenchman’s form since the turn of the year has been hugely encouraging despite the collective having generally laboured. No one can match his 29 headed goals since he arrived in London from Montpellier almost six years ago.

The goal had interrupted Liverpool’s dominance up to that point, but immediately settled Antonio Conte’s side. Cesc Fábregas, busily involved from central midfield, would fizz a further shot across goal, Marcos Alonso belted a glorious volley marginally wide, while Lloris Karius turned away Eden Hazard’s ferocious cross shot. The Belgian scuttled from flank to centre with menace, propelling his team forward on the counter, until summoned off near the end. His match shirt had been ripped and required a change, reflecting how closely the visitors were seeking to blunt his threat, though his display was irrepressible.

Liverpool, monopolising the ball for long periods, needed their own attacking players to make their mark. Mohamed Salah, back at the club where he found opportunities so limited prior to reviving his career in Italy, was cautioned for tumbling over Gary Cahill’s lunge with that a reflection of frustration. The Egyptian loitered on the periphery of this game, crowded out or starved of possession, while Chelsea defended feverishly.

Cahill, restored to form and the heart of the back-line over recent weeks, flung himself into blocks, while Antonio Rüdiger – fast becoming a cult figure in these parts – and Cesar Azpilicueta heaved to contain their opponents’ slippery attacks, with the visitors flinging attacking reinforcements into the fray in search of parity. Their pressure built as the home side retreated, craving the final whistle, but their only real scares in a cluttered penalty area came as Dominic Solanke strained but nodded over the bar.

Liverpool could hoist the European Cup later this month, but they cannot relax domestically just yet. Brighton may have to be beaten next Sunday to provide them with their safety net.