The city is too big, too haughty, too fast to be knocked out of synch by a mere World Cup 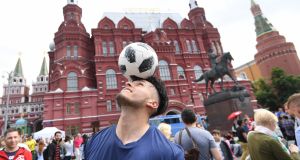 Friday evening now and, in the Arbatskaya metro station, the Egyptians are starting a revolution.

There’s about a dozen of them and they are so happy about life that it’s obvious to the commuters spilling from the trains in the usual weekend angst to be free that something special must have happened: that Salah must have been outwitted Uruguay.

The station is hectic at this time of the evening and even if Moscow isn’t rushing home to catch the first half of Iran-Morocco, they want to be out in the open air.

Still, these Egyptian lunatics: their chants bounce down the corridor and they wave flags and soon they are surrounded by locals, up for a photo opportunity. It’s disconcerting to learn, a few minutes later, that actually Egypt lost. What odds. These few fans are high on the experience; they are in Moscow, at the World Cup, the weekend is ahead of them. This moment will not come again.

Outside, near old Arbat Street, an early evening crowd has gathered around the street performers: there’s acoustic lads singing soulful ballads, a few ridiculously good classical musicians and a nutter of a teenager in an NY baseball cap riding a skateboard who takes off from a raised platform, sails a good 10ft in the air, realises he is way out of his depth, almost decapitates a deeply unimpressed guy in a suit and then lands with a clatter on his ass, picks up his board and dignity, apologising to all and sundry. Then he goes again.

In Pushkinskaya, two Mexicans in obligatory ponchos are staring in awe at the huge, imposing statue of the big Pushkin himself, who is gazing back down at them with an expression that says he doesn’t much fancy their chances of making it past the second round.

It’s a gorgeous evening: 20 degrees and cloudless, and the Mexicans seem uncertain where to go next. Every now and then you see small clusters of visitors – the Argentinians in their Messi shirts and a few Germans, but unless they go out to the fan zone in the university area, it seems likely that Moscow will absorb the presence of its World Cup guests without blinking. The city is simply too big, too haughty and too fast to allow itself to be knocked out of synch by a mere football tournament.

Like the rest of us, the Mexicans are probably just trying to square the Moscow that they are experiencing to the place they had imagined.

When Conor O’Clery moved to Moscow in the 1980s as the first Moscow correspondent of The Irish Times, he inadvertently registered the first Irish company in Russia by informing, as compelled, the existence of the bureau with Gorbachev’s press secretary.

For everyone who followed O’Clery’s dispatches in those years, it was like reading of a place that was, spiritually if not geographically, more distant than the moon. There’s a great moment in his memoir where he goes along to meet the press secretary and offers a bottle of Irish whiskey (Bushmills, controversially) to the administrator as a goodwill gesture. “Aha. A small corruption. I’ll take it,” he said cheerfully, putting it in his desk drawer.”

Moscow and Russia have changed aeons in the 30-odd years since that connection was forged over a bottle of spirits. At that stage, foreign journalists had to make special applications just to leave the city. This summer, thousands of visitors from all over the world will romp across the interior to visit cities that for decades were, to the outside, merely placenames on maps and photographs. Never before in the long, extraordinary history of the land will so many nationalities have poured through so many of Russia’s cities during the same period of time. The country is throwing open its doors as never before.

In many ways, Moscow on this June Friday has the same feel as its notional opposite, New York, or London: muggy, pleasant, giddy with new money sloshing through it, the bars well stocked for the Friday crowd, and starting to heat up, in a hurry for the next thing and its transport system brimming with the suited businessmen, office workers, hipsters, skateboarders, Ramones T-shirts, the goths and whoever else you want to be.

And if it’s true that Muscovites don’t smile in the trains, it’s because they are checking Facebook. As Sting might say, the Russians love their iPhones too. So in some ways, yes, you could be in any big city. But then you happen on Ulitsa 1905, a station named after the revolution of that year, or you stand and gape slack-jawed at the Kremlin or St Basil’s Cathedral or Lenin’s mausoleum and it’s impossible not to be struck by precisely where you are and what has happened here before.

Or in the evening, on the swankier streets, you will see Russian couples floating past in the highest and most formal of formal wear, as if they have stepped straight out of summer 1911. Because of the colliding energy of where Moscow has come from and of where it is racing to, it defies any neat summary that its World Cup visitors may want to ascribe: it is both exactly and nothing at all like we all expected.

On Thursday the Russian team opened the World Cup with their unexpected, fabulous 5-0 win: the night could not have gone any better for the fans or for the officials. And the Muscovites in the Luzhniki cheered and were delighted. But that, too, was just a moment. Friday came and it was another day. It’s after 7pm now and the football visitors, conspicuous among the 12 million Muscovites, are doing their best, in these early days, to find the World Cup. It is there waiting for them, too: they just need to look a little harder.

1 Trump endorsement by Jack Nicklaus leads to avalanche of dismay
2 France 35 Ireland 27: Ireland player ratings
3 Ireland fall short against France as England win Six Nations title
4 Stockdale’s blunder and French flair: Where Ireland came undone in Paris
5 World Handicap System: What is it? How does it work? Will my handicap change?
Real news has value SUBSCRIBE
Crossword Get access to over 6,000 interactive crosswords