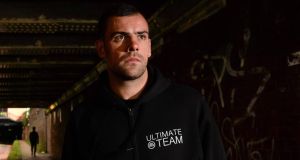 Darron Gibson: was dismayed not to play at some stage against Spain or Italy. Photograph: David Maher / Sportsfile

Precisely a week after Giovanni Trapattoni parted company with the FAI, Darron Gibson has announced that he would welcome a recall to the Republic of Ireland’s international squad. The timing, the 25-year-old made abundantly clear while promoting EA Sports Fifa 14 in Manchester yesterday, is anything but a coincidence.

The midfielder who, as it happens, is also available to Roberto Martinez for the first time this weekend after missing the start of the club season with a knee injury, is anxious to return after a year-long self imposed international exile which, he says, was down to a mix of anger, upset and stubbornness.

The timing of his decision, apparently, is rather more straightforward. “Obviously because Trapattoni is gone,” he says. “I never really wanted to make a big deal of it to be honest with you. But after what happened at the Euros I just felt I couldn’t play under him anymore.

“I was embarrassed when I came back from the Euros (after) not winning a game and not getting on the pitch,” continues the former Manchester United star who was one of five Ireland outfield players who didn’t get to kick a ball at the tournament. “I was playing every week at the time for Everton and we finished in the top six of the Premier League.

The northerner, who says he has been anxious over the past 12 months to answer his critics but unwilling to stir things up, insists that he went to Poland entirely resigned to the fact that Glenn Whelan and Keith Andrews would be the team’s first choice central midfielders after the pair had played such a significant part in the qualifying campaign.

He says he was dismayed, however, not to get on at some stage during a game against Spain in which the team crumbled and fuming not to feature against Italy given that the team was already out of the tournament.

“I do regret not playing (since the tournament),” he reveals, “but like I said I was embarrassed and that angry that I didn’t get on the pitch for even a second at the Euros. I felt I couldn’t come back and play for him again. When he made the three subs against Spain I’m sitting on the bench and thinking “what’s going on? There’s obviously something wrong. (But even then) if I’d gone on against Italy, I would have carried on playing.”

Gibson insists he is entirely unaware of any basis for Trapattoni to have treated in him in the way he did and, when it was put to him, the player flatly denied that there is any truth in the rumour that has done the rounds since that he and one other player fairly spectacularly broke a curfew during the squad’s first few days in the resort town of Sopot.

Established figures
He says, in any case, that the problems began well before then with Trapattoni, he claims, having told him that he would not get to Poland at all if he did not come into Dublin with the Championship players, a week before the the squad’s more established figures gathered to begin their preparations for the tournament.

Despite that, the Derry man featured in two warm-up games, playing 90 minutes against Bosnia-Herzegovina and almost 30 in Hungary. When he asked Trapattoni why he had not been used against Spain, however, he says the now 74-year-old simply replied: “You’re young” and never elaborated.

“If you have a player playing for a Premier League team that finishes in the top six,” he says, “and you have someone, I don’t want to show any disrespect to Paul Green but he had been released from his club and he got on the pitch and I didn’t, there was obviously something wrong.”

Contract up
As it happens, Everton actually finished seventh and Derby had tried to keep Green who was simply free to leave for Leeds as his contract was up, but his point was pretty clear.

After all of that, it is somewhat surprising to hear Gibson suggests that Trapattoni should be remembered well by the supporters. “It (his legacy) is probably positive to be honest,” he says, “nearly qualifying for the first one, qualifying for the second one . . . Obviously it fell apart a bit towards the end but if the fans sit down and think about it will probably be positive.”

Less shocking are his assertions that there was little interaction between the players and Trapattoni outside of training itself (“There was a lot more communication from Stan”) and that there might have been a little bit more football played along the way (“I got the impression he didn’t want to play out from the back”), something that he hopes might happen under the new manager, whoever that might be.

Strong favourite
“Obviously Martin O’Neill is a strong favourite for it,” he says. “I think he’d be quite good, he’s experienced and I think he’d get on quite well with all of the lads; he’s supposed to be really good one on one with players and that.” Later, he adds with a laugh: “He might understand me a bit better.”

Really, he insists however, he doesn’t mind who gets the job . . . he just hopes he new man looks more favourably upon him. “I would love to be involved in the next two games to be honest but it’s not my decision,” he says. “I’ll make myself available again and we’ll see what happens from that.”

Darron Gibson was promoting EA Sports Fifa 14 in which he features. The game will be available nationwide from September 27th.