Kiev airport unable to allocate landing times as up to 20,000 fans expected in Ukraine 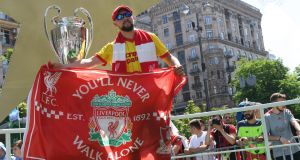 A Liverpool fan at the fan zone in Kiev ahead of Saturday night’s Champions League final in Kiev. Photograph: Sergei Supinsky/AFP/Getty Images

Liverpool are working with fans and tour operators in search of a resolution after around 1,000 supporters had their flights to this weekend’s Champions League final cancelled.

Worldchoice Sports said on Thursday that with “deep regret”, three flights taking Liverpool fans to Kiev for Saturday’s game had been cancelled.

The operator said that due to so many flights heading to Ukraine ahead of Liverpool’s meeting with Real Madrid, Borispil Airport had been unable to allocate times for the three planes. Up to 20,000 Liverpool fans are expected to make the journey.

Worldchoice added that it had done everything it could to secure slots, but that to “reiterate, the problem IS with Kiev.”

That left upwards of 1,000 Liverpool fans fearing their plans were in ruins, although the club are hopeful of working through the problems.

“Liverpool Football Club is continuing to work with all of the relevant stakeholders in the UK and Ukraine in an attempt to resolve a situation which has left around 1,000 fans without flights to Kiev for the Champions League final,” a statement read.

“Flights chartered by World Choice Sports had been set to take supporters to Ukraine, but a dispute between the Widnes-based travel company and the aviation authorities in Kiev over the size of the aircraft has led to the trips being cancelled.

“Along with officials from Liverpool John Lennon Airport, Liverpool City Council, UEFA and the authorities in Kiev, Liverpool FC has been endeavouring to resolve the issue since it first came to light and will continue to do so until all avenues have been exhausted.”

Liverpool’s chief executive, Peter Moore, added on Twitter that he was “optimistic” of reaching a “favourable resolution”.