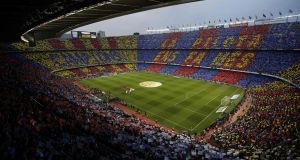 The El Clasico meeting between Barcelona and Real Madrid at the Nou Camp could be rescheduled to December because of protests in Calalonia. Photograph: Pau Barrena/AFP via Getty Images

Barcelona coach Ernesto Valverde has called on Spanish football authorities not to suspend or move their Clasico meeting with Real Madrid out of respect for the fans, following protests and demonstrations in Catalonia.

La Liga has requested the Spanish Football Federation (RFEF) move or postpone the October 26th match amid ongoing protests in Catalonia over the jailing of nine Catalan separatist leaders.

Spain’s El Mundo newspaper reported on Thursday that the federation was poised to postpone the fixture, with a new date proposed of Wednesday, December 18th.

Valverde, however, believes the match should go ahead as planned.

“There’s been a lot spoken about this game. It’s true that there was a proposal to change the fixtures round, but we weren’t in favour of that because we play [away] the Wednesday before,” Valverde told a news conference on Thursday.

“There’s nine days to go until the game. We need to respect the calendar and also the fans.

“Under normal circumstances we’d play at home. They’re anticipating certain different circumstances and while we know that this week has been out of the ordinary, we are hopeful of playing the game at our ground. That’s what we want to do.”

There have been protests and violent clashes with police throughout the region this week in the wake of Spain’s decision to jail nine Catalan separatist leaders for their part in an illegal referendum on independence.

“It’s a chance for people in society, as well as our fans to demonstrate a number of things. We respect the opposite – in this case our opponent – and that by being civil the match can be played,” Valverde said.

“We want to get rid of all the doom-mongers who say the game won’t go ahead. We can show that the match can be played as normal and forget about them.”

Over half a million people watched Limerick v Galway on RTÉ 15:16
IRFU hopes to open contract talks with players in January 15:15
IRFU hopes to open contract negotiations with players in January 14:56
Pauw: Delay in Ireland’s Covid-19 test results compared to Germany is ‘unfair’ 12:55
Full 36-player panels to be allowed at intercounty matches under Level 3 12:46