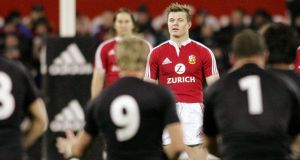 Lions captain Brian O’Driscoll eyes up the New Zealand All Black haka before the ill-fated first Test match in Christchurch in 2005.

Bad and all as losing him within a minute of the kick-off was, the real psychological damage of Brian O’Driscoll’s loss is that the Lions have to win back-to-back tests in New Zealand for the first time ever without their talisman. After losing their most influential forward, Lawrence Dallaglio, within 19 minutes of the tour opener against Bay of Plenty, the Lions could hardly be in a worse state.

Gareth Thomas, the ebullient Welsh skipper, who calls a spade a spade like few around, is undoubtedly the right man for the job at this most difficult of times for the Lions. He will, however, need all his good spirits after being appointed the new Lions captain in succession to O’Driscoll. Congratulations, Alfie? Commiserations more like.

There were no words for the crestfallen O’Driscoll when he spoke of his feelings in Christchurch. “I’m disappointed there is no sanction,” said O’Driscoll. “There’s plenty to see. I’ve been on the receiving end before but this is beyond the rules and regulations of the game. My real disappointment is that he (Tana Umaga) didn’t come up to me as I was being stretchered off. As a captain that is common courtesy. I don’t know if there’s an element of guilt in this. He hasn’t said anything subsequently.”

The only All Black who did offer that courtesy on the pitch was scrumhalf Justin Marshall. “It could have been a lot more serious. It was a matter of getting my head out of the way. Two guys grabbed a leg each and finished off the tackle. I wasn’t just dropped. I don’t know if it was premeditated, but I can’t but feel aggrieved,” said O’Driscoll.

“There were times after the game when it was difficult to hold the tears in. It’s still hard to talk about it. It hasn’t really sunk in that I was captain of the Lions for a minute but I suppose it was better than no time at all. It was difficult for my family to take having travelled out here to see me play. Such is life and sport.”

His cousin Gary, one of the two Lions doctors in the party, maintained there would be no reason whatsoever why the Irish and Lions captain wouldn’t make a complete recovery within three to five months.

Even though Lions legal adviser Richard Smith had submitted these same shots and stills to the citing commissioner, Willem Venter, the South African had made his decision not to cite the two players with seemingly indecent haste by 2.30am on Sunday and within hours had already taken a plane home to South Africa.

“I’ve watched it frame by frame,” said Woodward, “and for the citing to ignore that incident, especially as we asked it to be looked at and the player involved is seriously injured, and the guy to fly off to wherever he’s gone, is wrong.”

Haka reaction
To the notion that O’Driscoll had inflamed an already highly charged situation with his reaction to the haka, Woodward said: “I hope that was not the case because that was my idea and it was based on getting an email from a Maori.” The email apparently advised him as to the proper manner for accepting the challenge respectfully. “The chief should go out with one of the youngest players and he should then accept the challenge after the haka is done by picking up and throwing a piece of grass in the air as a mark of respect and friendship. That’s why we did it. We thought it was a nice idea.”

O’Driscoll appeared to toss the grass over his right shoulder but Woodward and Alastair Campbell stressed that this was proper procedure. “Even if they’d taken what we did with the haka in the wrong way I wouldn’t suspect for one moment that that would be a reason for the incident,” added Woodward.

The All Blacks camp said they took no umbrage over O’Driscoll’s response though Umaga himself – who stood staring for several seconds after the haka – was kept under wraps.

Thomas admitted that what happened to O’Driscoll would be an additional spur. “To me Brian is still the captain because from day one the boys made a pact to follow him and we all stick by that pact. It’s not the circumstances I would have liked and today has been a pretty ugly day really.”

Asked if he felt the All Blacks captain owed O’Driscoll an apology, typically, Thomas didn’t toe a diplomatic line. “Yeah. Definitely. If they realise what they’ve done, then yeah.”

With uncanny timing, Woodward was obliged to give another impromptu press conference when it emerged Danny Grewcock had been found guilty of biting Mealamu and suspended for two months.

“Obviously he’s done something wrong and we fully abide by the decision,” said Woodward of a repeat offender.

PR offensive
The Lions PR offensive did prompt a change in tone from Sunday’s triumphalist media reaction (one paper advising Alastair Campbell to admit “we were crap”). The front page of the Dominion Post described the video footage as “damning” in highlighting that the Lions wanted an apology from Umaga.

Not that all of this entirely clouded the debate about Woodward’s strategy and tactics. “We’re hugely disappointed with what happened. We feel we let a lot of people don,” admitted Woodward.