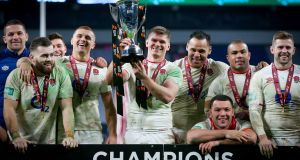 Jones is due to hold forth on the merits of the Large Hadron Collider and whether they can effectively forge tiny quantum black holes.

No, but he may as well as he has got an opinion on everything else that he kindly shares through the media on a variety of topics to help to better understand rugby and its nuances during his traditionally entertaining press conferences. He’s a keen student of dissemination when it comes to trying to destabilise opposition teams but may suffer from a bad memory because he’s prone to contradicting previously held views from time to time.

Hasn’t he tossed a barb or two Ireland’s way in the past?

There were his concerns for Johnny Sexton’s safety that followed on from a contrary assertion that the outhalf was overprotected by referees. There was the suggestion that Ireland kicked way too much ball and most recently a dissertation on Andrew Porter’s scrum technique ahead of last year’s Autumn Nations Cup clash at Twickenham. He’s an equal opportunity advocate when it comes to barbs, famously ragging New Zealand ahead of the 2019 World Cup semi-final. The examples are legion.

They haven’t always hit the mark, a few backfired?

Yes, but he does occasionally recognise when he may have overstepped the mark. He said in an interview following his whiplash comments about Sexton: “At the right time I will [apologise]. I haven’t yet but at the right time I will because he is a brilliant player. I love him as a player.” Jones would argue that generally he’s just indulging in a bit of fun and games of the mind.

You can do that when you’re winning. Are England the team to beat once again in the Six Nations Championship?

World Cup finalists in 2019, Six Nations champions in 2020 and also last year Autumn Nations Cup winners, so the short answer is “yes” and they have the team that they see as their closest rivals, France at Twickenham. They travel across the Severn Bridge to Cardiff in week three and close out the campaign against Ireland in Dublin, a venue that holds no fears in recent times.

A few, prop Joe Marler has withdrawn from the squad for personal reasons, secondrow Joe Launchbury is out with a broken leg, while Sam Underhill has a hip problem, the severity of which has not been fully disclosed. But before anyone begins to jump up and down, it is worth noting that Underhill has been replaced by Wasps try and turnover machine Jack Willis, an example of England’s strength in depth. Scrumhalf Harry Randall and Wasps centre Paolo Odogwu are the new faces, along with prop Tom West.

England changed some of their coaching team ahead of last year’s Six Nations, is there a discernible difference?

Highly regarded backs coach Scott Wisemantel returned to his native Australia to take up that role with the Wallabies and was replaced by Sevens specialist Simon Amor. The jury is still out on whether he has added extra layers to the attack as he approaches a second Six Nations campaign or is it more down to individual brilliance, ala Jonny May. For all the finger-pointing at others, England remains a pragmatic, kick-first, territory-obsessed team.

South Africa born, former Scottish international prop Matt Proudfoot – he was part of the Springboks coaching team that masterminded the 2019 World Cup final win over England – is a highly regarded forwards coach and it was that power game that underpinned their title victory last year.

Can anyone stop them?

France did so last season and their Espoirs – the French were missing a coach-load of players due to Top 14 commitments – almost repeated the feat in the Autumn Nations Cup final at Twickenham, losing to an Owen Farrell penalty in sudden death overtime after the scores were tied 19-19.

There isn’t a huge amount of subtlety to England. They are very good at squeezing the pressure points, set piece, contact, breakdown and shading the aerial duels; pedestrian won’t cut it nor will a conservative approach. France and South Africa, their two most recent conquerors, matched them up front and had the flair and creativity to hurt them out wide.