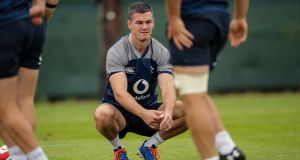 Ireland head coach Joe Schmidt suggested that Johnny Sexton could play some part in this weekend’s penultimate World Cup warm-up match against Wales at the Principality stadium, most likely off a bench that is likely to contain a number of senior players including captain Rory Best.

Jack Carty is in line to start with Ross Byrne having missed training with some bumps and bruises on Monday.

Schmidt will finalise the squad for Japan after Saturday’s game – it won’t be announced publicly – and ahead of the return fixture against Wales on Saturday week.

Keith Earls has been troubled by a little tendonitis in a knee and is unlikely to be risked while Cian Healy, who picked up an ankle injury against England at Twickenham, has played two warm-up matches and would not have been considered for this weekend. He will be available for the return game against Wales at the Aviva stadium.

Conor Murray passed all the return to play protocols but is unlikely to be called on for the game in Cardiff, a state of affairs that had already been pre-determined.

“No, he doesn’t have a leg injury per se, he’s got a bit of [muscular] stiffness and soreness. If we wanted to pick him this weekend we could pick him. If you had seen him out there and how hard he was running, it’s a progression for him. When people don’t have full medical information and report things there is always a risk.

“You get a little feeling of discomfort and we just didn’t want to do that. Because he got a bit behind with his thumb and was then chasing his tail, we would anticipate Johnny would definitely play if not this weekend then next weekend.

“Cian [Healy], he is bullish. Cian was involved in the first game and the second game, he probably wasn’t on the radar for this game anyway. We are probably just going to stick with that plan anyway. He is unlikely to play this Saturday but will play the Saturday after. I would be gobsmacked if he is not available for that because this weekend [and in terms of playing] is something that we could look at with Cian.

“Conor [Murray] trained fully this morning and did all that was required of him. Our initial plan for Conor was to only play two games before we go, last weekend and potentially the final game of the lead-in.

“He passed his HIA 1 at the time, he passed his HIA 2 post match and the following day he passed his HIA 3 which means according to the protocols there was no concussion. He did cop an elbow to the side of the face as he came across and dropped into the tackle, just as Jonny May’s elbow came up. Those sort of things happen. He bounced up and was fine and trained fine today.

“[Keith Earls, it’s] been really frustrating for him. He looked super sharp. He got a little bit [of] tendonitis in the knee, just above it. It’s just niggling away more than anything else. We have tried to get any inflammation out of that by not pushing him. He’s a player who we know plays really well fresh.

“It is about playing the long game with Keith and making sure that he is 100 per cent ready to go. I know that he will be ready for the weekend after this one. I doubt whether he will be involved this weekend.”

“So, there are guys who are going to get an opportunity this weekend and if they perform better than any player who played last weekend then there is always a contest and you have got to keep that contest live. We have seen that in other teams.

“We saw an All Black team that was beaten 47-26 come out and win 36-0 with a number of changes, where established players were left out and new, fresh players came in and put them under pressure. So players will be conscious of that.”

1 TV View: Roy Keane but Daragh’s keener as Late Late fails to shoot the lights out
2 Ireland Slam England at the Gardens to open up Grand ambitions
3 ‘Manchester United are lucky to have you’: Klopp responds to Donegal schoolboy’s letter
4 Leinster get the job done against Ospreys
5 David Brady says he's witnessed illegal payments of GAA managers
Real news has value SUBSCRIBE

TV View: Roy Keane but Daragh’s keener as Late Late fails to shoot the lights out 00:30
Mourinho says Spurs finishing in top four would be major highlight of his career 22:35
Solskjær backs Martial to get 20 goals for Manchester United for first time 22:30
Graham Burke’s five-goal salvo tears 10-man Cork apart 22:23
Dundalk take the points but Shelbourne pointers are positive 22:24
Here is your handy guide to sport on television this week