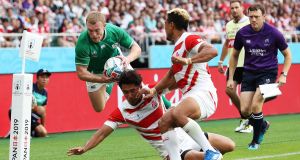 Keith Earls of Ireland is pushed out over the touchline during the Rugby World Cup Group A game against Japan at the Shizuoka stadium. Photograph: Stu Forster/Getty Images

It doesn’t seem so long ago since Keith Earls was the impressionable young flyer who was almost in awe of some of the established legends in the Irish squad. Now he is one of those whom the younger players don’t just look up to but, by all accounts, simply adore.

It’s the way he carries himself, his personality, his professionalism, along with the quality of his training and performances. Earls knows his own body and applies such a personalised training and dietary regime that, at 31, the Moyross flyer is as quick as he ever was.

An innate worrier by nature, he’s also learned to live with the pressures of his craft, rather than torturing himself like he used to.

This is his third World Cup (in which he’s missed only one game, this tournament’s opener against Scotland) and will be his third quarter-final. He’s now learned to treat it like any other game, trusting in his own match-week routine.

“That probably all comes with experience. I’m really enjoying this week, I’m a bit more relaxed. It’s another game, isn’t it? It’s just against the reigning world champions and it’s going to be a massive challenge but if we’re to test ourselves and want to go on to achieve great things, we’re going to have to play them at some stage.”

In his first World Cup in 2011, Earls would have tied himself up in knots.

“Back then, I probably would have changed something during the week, something ridiculous like changing my diet or changing my routine or tried to get better. Now I have a good routine and I prefer to be way more relaxed.

“I think that comes from doing all of my homework, looking at our detail, looking at their plays. The biggest thing is if you prepare as well as you can and can look yourself in a mirror after a game, that’s all you can do. Win, lose or draw, it doesn’t matter once you can do that.”

The shift from the 23-year-old who looked up to the likes of Brian O’Driscoll, Paul O’Connell and Ronan O’Gara to one of the squad’s senior pros is, he admits, a “huge” change.

“I probably didn’t use the lads enough, I probably didn’t ask them enough questions, because it probably would have been seen as being mentally weak back then. I think now we’re a lot more open-minded, it’s all right for fellas to be nervous. If you’re not nervous, there’s something wrong with you. Nerves are good because it means you care. It’s trying to use those nerves as a positive rather than a negative.”

That wasn’t something he had mastered even four years ago, and prior to the final pool game against France he admits: “I felt violently ill all week going into it. It was ridiculous. After that game I said to myself I’d never leave myself get to that stage again. My wife thought I was going to have a heart attack with the state I was in and I’ve learned to deal with that.”

On top of that experience, the passing of Anthony Foley – three years ago yesterday – helped give Earls a new perspective on what is, ultimately, only a game.

“I was working on it but then him passing kind of brought it to light. As I’ve said, I prepare as well as I can and what’s the worst case scenario of the weekend? You either go into the history books or I go home to my wife and kids, and everyone’s healthy,” he says with a contented smile.

“Enda’s always floating around. That’s why he’s there, he’s brilliant. He doesn’t bombard you, it’s up to you to go to him and I’d use him a small bit, I think. As I said with my experience, I’m happy with working with myself but sometimes he’s great. I’d say, ‘Enda, my mind’s racing’ and he’ll sit you down and have a chat.”

In the same way, Earls wouldn’t bombard younger players, but would always be available if approached. “I’d have no problem about telling me them my experience in the past.”

In general, we’d be together a lot, myself, Jacob [Stockdale] and Jordo [Larmour]. I learn stuff off them as well. In fairness to the two of them, they are as cool as a breeze and I wish I knew back then what I know now when I was their age.

“They’re great and there’s no fear in them. And even Andrew Conway as well, he’s been massive for me in this World Cup. On high-ball stuff, he’s the master of the high-ball stuff so I sort of pick his brains as well.”

Earls himself says he’s feeling as well as ever.

“I’m feeling great. I think it’s the Onsen baths over here! They’re great, the Japanese, with their hot baths, you can go and relax. I had terrible back issues for two years. I genuinely, bar one or two injuries, feel the best that I’ve felt in two years. That’s hand on heart.”

With 30 Test tries, Earls is joint second on Ireland’s all-time list alongside Tommy Bowe. It’s been a relatively unsung achievement perhaps because unlike others high on the list, like Bowe in the Grand Slam finale against Wales in 2009, Shane Horgan at Twickenham, or The Great One on countless occasions, Earls doesn’t have a signature try.

He is also content not adding to that tally, or his Irish World Cup record of eight tries, as long as Ireland keep winning. But for injuries he’d be a centurion by now, although as it is this is the biggest game of his 81-Test career.

Time was when that might have freaked him out a little, but Old Man Earls is a different man now, and still flying.