Owen Doyle: The refs know their duty – but do the coaches and players?

The referees don’t always get it spot-on, but everyone must adjust to new tackle laws 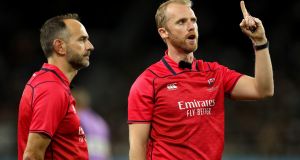 We started out in September looking at the focus areas for the match officials. So let’s see what’s been happening so far.

Firstly, when we look at high tackles, there is still some confusion – and the referees have not always got it spot-on.

This is where we need to think carefully. Who is confused? It’s not the referees, who are taking their responsibilities very seriously, but are not always getting it right in terms of consistency.

They deserve high praise; they know their duty. World Rugby elite referee manager Alain Rolland and selectors Lyndon Bray and Joel Jutge also deserve praise – I am certain that they are keeping things calm, correcting things when necessary, and are a tremendous support for the referees.

It’s coach and player confusion, I’m afraid. Michael Cheika’s comment that he doesn’t know the rules (actually, they are laws, and there’s a difference) damns no one but himself.

Does he know his duty?

Then came, and thankfully so, measured and rugby-wise comments from New Zealand coach Steve Hansen stating clearly that players and coaches have a responsibility to adjust to the tackle laws. That’s it. Importantly said, he knows his duty.

Players have died recently playing this game and there is a duty that all coaches have and must accept.

My admiration, respect and sympathy are without measure for the father of the young French player, Nicolas Chauvin, who died following injuries sustained in a double tackle. Rightly, he is taking legal action: “It is my duty to him.”

There have been other issues that we need to address. The breakdown area has too often been a shambles: players off feet, beyond the ball, obstruction and side entry featuring regularly. But, out of the blue, there were four or five side-entry penalties last week. Good, keep it up.

In terms of the scrum, having pushed for a straight throw during the tournament, I am now actually glad that this didn’t become a feature of the tournament. It remains to be, and must be, addressed. But with all the tackle stuff going on, it would have just added to the pressure on the referees, and they are under quite enough.

The problematic issue of the blitz-rush defence being offside or not continues. There is no great evidence of the referee and his assistants working together to manage and sanction the offside line. The referee must up his work rate at the ruck. Too many leave it solely to their assistants, which clearly does not work.

The lineout has functioned well but, while the throws have been straight, they’ve too often been straight down the thrower’s own line.

Some years ago, at the Aviva, Ireland played Wales. A major part of the Irish coaches’ preparation and game plan was to contest the Welsh lineout, but this was scuppered from the get-go as the Welsh hooker simply threw the ball straight down the side of his own players. Challenging for possession was impossible. The coach was less than amused.

As the pool matches come to a close, the referee selectors will be finalising their plans for the knockout appointments. Coffee and cold compresses will be needed. This is where it gets competitive, and there will be disappointment.

If the referees and TMOs have felt pressure up to now, well, what’s coming will put that in the ha’penny place. The selectors will have that uppermost in their deliberations.

First, let’s reprise: 12 referees were selected for this World Cup clearly on merit, and the subsequent appointments made to the pool matches were a blend of merit and experience. The tough pool matches, unsurprisingly, were given to Wayne Barnes, Jérôme Garcès, Nigel Owens, Jaco Peyper, Ben O’Keeffe and Angus Gardner.

In the heel of the hunt it’ll probably come down to the first four of these, and I’ve a feeling that they will have the responsibility of bringing the tournament home, and will be the only ones we see in the middle from the quarters to the final. Gardner, on performance, and O’Keeffe, on experience, are likely to miss out.

These matches need container-loads of experience, which a referee in the autumn of his career will have. And lessons will be learnt from the past.

In 2007 a young Wayne Barnes was given the France v New Zealand quarter final. New Zealand were hot favourites but lost. The appointment did not work out, and he showed great strength of character to recover from the vitriolic media attacks which followed.

Similarly, the 2011 final between New Zealand and France went to South African Craig Joubert, which was a match too far at that point in his career.

This final seems to be a straight shoot-out between Barnes and Garcès, with my opinion putting Barnes in front on performances so far. Of course, if England make it, then that’ll rule him out.

If it’s an England v France final, then both of those are out of the reckoning. It’s probably not going to happen but . . . if it does, then it pretty much comes down to Owens or Peyper. While Owens reffed it in 2015, it should not rule him out – there is precedent for two in a row. Just pick the best one.

No matter which teams make the final, the selectors must go for the most accurate referee, who will strike the right balance between contest for possession and continuity of play.

Those are the simple criteria for all knockout appointments.