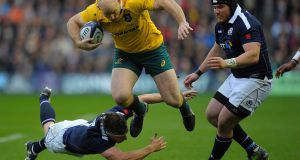 Stephen Moore has been an inspirational captain for Australia. Photograph: Getty Images.

Ireland will need to bring their absolute best defensive game to the Aviva, because the Australians have returned to the only rugby philosophy that has ever brought success to Wallaby teams.

The Australians are running the ball.

Unlike the New Zealanders who rely on superior power to explode through defences, the Australians, like the little marsupial they are named after, have to be more nimble and agile. They rely on high-tempo ball movement, with well structured attacking patterns.

If executed with accuracy, the Wallabies are a joy to watch.

The forwards running lines have improved, with the ball carrier accepting the ball very flat, then using footwork just before the point of contact and solid leg drive. The Wallabies have “bent” all the defensive lines they have played, including some wonderful attacking raids against New Zealand at Eden Park.

It is Bernard Foley who is leading this attack.

Foley has matured and developed into an excellent outhalf. A feature of his play has been the changing of the point of the attack, to the short side.

The rapidly improving inside centre, Reece Hodge, is trailing Foley around, like a “faithful drovers dog”. Hodge has received several short inside passes leading to line breaks. I suspect the Australians will have plans to get Hodge running at Paddy Jackson.

Hodge is not yet the finished article, as his error rates are too high, however Michael Cheika is correct in continuing to select him. His performances have continually improved and his potential is high.

Stephen Larkham is providing much of the rugby intellect behind some very well thought out attack. As in his playing days, when he terrorised every team in the world, his knowledge is wonderful to behold. It is the accuracy of his players’ passing and there ability to execute proficiently that remains an “unfinished work”.

Australia has returned to the attacking philosophy, that has underpinned all successful Australian teams since its inception, by the legendary 1927 Waratahs. That team was made up of players from six Sydney schools, yet they were the national team. After the first World War, rugby collapsed in most parts of Australia. The Waratahs toured Europe in attempt to kick start interest in rugby back home in Australia.

It was the great minds in this team, such as Johnny Wallace, who won a Grand Slam with Scotland in 1924, and Cyril Towers, who invented “the gain line theory” on that tour. The concept is counterintuitive. In attack you accept the ball flat and at high pace. The ball carrier running closer to the defender putting more pressure on both the defensive system and the tackler.

It is a testament to their genius that 89 years later, it is not only relevant, it is the core idea that underpins the Australian attacking system.

“Gain line philosophy” was part of Michael Cheika’s’ rugby education at the famous Randwick club in Sydney. In coaching this typically Australian way of playing, he has won back the respect and support of legions of rugby supporters in Australia, who once again are rightly proud of the Wallaby style of play.

Even more importantly, this group of Wallabies are conducting themselves with dignity and manners off the field. Regrettably, that has not always been the case in recent past. Some individual let their team-mates and Australian rugby down with some “rock star” attitudes and behaviours.

The inspirational captaincy and leadership of Stephen Moore has been an excellent influence in raising standards both on and off the field. He and Rory Best are “cut from the same cloth”.

I hope they have a chance to sit down and have a pint together after the game. There is a touch of the “rugby doppelganger” between these two excellent men. Combined, there is not much hair between them. Both have Irish parents and will have played hooker one hundred or more times for their countries. There are two crooked noses, four cauliflower ears and two of the finest male characters you will ever meet.

The Australians are also defending with passion. Defensive coach Nathan Grey has increased the Wallaby line speed and effectiveness at the tackle by a considerable margin. I had the privilege of coaching Nathan at the Waratahs. I can see much of his character traits in the tough and relentless drive in the Australian defence.

Yet, with only one-point victories over Scotland and France, Australia are more than vulnerable. It was against Scotland that the Australians weaknesses were most evident. While playing some exciting rugby, several last passes did not go to hand. The men in gold were inaccurate and escaped defeat . . . just.

The running game is all about “risk and reward”. There is an element of risk, but the rewards are very high.

No Australian team, not even the “immortals” of the 1927 Waratahs, could win all five matches against the traditional national team giants of the north. The 1984 Grand Slam winning Wallabies did not play France, so they could only claim the four “home” nations scalps.

With victories in Cardiff, Edinburgh and Paris packed away, only Ireland and England stand between this teams and a place in the Australian rugby pantheon. The men in gold have momentum.

Incredibly, three weeks after defeating the world champions, this injury-hit Irish team are “under dogs” but we all know that is when Ireland are at their most dangerous.