Jean de Villiers: Joe Schmidt has made Ireland a ‘much better team’ 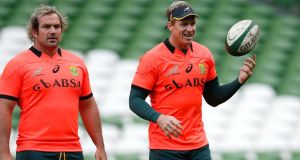 The former Munster centre has warned South Africa they cannot expect to coast to victories over northern hemisphere sides after their impressive 27-25 victory over the All Blacks last month.

South Africa start their European tour at the Aviva Stadium on Saturday, with boss Heyneke Meyer fielding the same starting line-up that accounted for New Zealand.

“You can see it in the detail and how they approach matches now,” said De Villiers.

“Schmidt’s success at Leinster speaks for itself and he was pretty useful too when he worked under Vern Cotter at Clermont.

“Ireland are a much better team under Schmidt and the players look as if they are enjoying themselves.

“That is clear from their Six Nations success and we know this is going to be a tough match and we will have to be at our best.”

The 33-year-old Springboks skipper admitted he does not know what to expect from facing new Ireland centre duo Robbie Henshaw and Jared Payne.

“They bring something different to the game compared to Gordon D’Arcy and Brian O’Driscoll, who to my mind was the greatest centre of this generation,” said De Villiers.

“They’ll be coming out firing and want to prove a point.

“With regard to Jan (Serfontein) we have been really linking well and interchanging on the pitch.

“He has really matured over the past year and has played some great rugby.

“We are under no illusions about the Irish: they are the Six Nations champions and they should have beaten the All Blacks last November and even the New Zealand players admitted that.

“We have made strides ourselves over the past year but just because we beat the All Blacks doesn’t make us a perfect side.

“This match is another test for us and presents different challenges.”