Coronavirus: Ireland’s game against France in Paris remains on for now 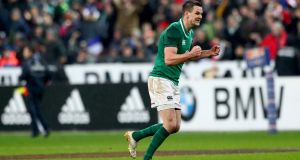 The concluding Six Nations game between France and Ireland at the Stade de France on Saturday, March 14th, is set to be played as things stand. However, amid the increasing likelihood of the French government progressing to ‘stage three’ of its strategy to deal with the outbreak of the Covid-19 coronavirus in “the next week or two” there remains the distinct possibility of the game being postponed.

Following on from the postponement of the Ireland-Italy game which had been scheduled for the Aviva stadium this Saturday, the Six Nations confirmed on Thursday that the Italy-England game in Rome on Saturday, March 14th has also been called off.

This followed a decree by the Italian government that the game had to be played behind closed doors, and after discussions with the Italian Federation and the RFU, the Six Nations determined that the match should be postponed.

With an estimated 30,000 English fans expected to swell the Stadio Olimpico to its 73,000 capacity, the loss in revenue for the Federazione Italiana Rugby (FIR) would have been an estimated €2.5 million.

Were the French government to decree that sports events had to be played behind closed doors from any time next week onwards, the France-Ireland game would likely be postponed as well. Similarly, in that scenario, the FFR (Fédération Française de Rugby) would stand to lose €2.5 to 3 million in lost ticket sales. Furthermore, a precedent has now been set with the postponement of the Italy-England game.

Italy has registered 41 deaths from coronavirus in 24 hours, bringing the total to 148 deaths, a total of fatal cases behind only China. By contrast, as of tea-time on Thursday, there have been “only six deaths” in France, as the headline in Le Dauphiné libéré (which circulated in the Rhône-Alpes region) put it on Thursday.

However, like all other sports bodies in the country, the FFR is literally in hourly contact with both the French minister for sport and minister for health. While there was no change throughout the day in the government’s stance on sports events taking place in outdoor stadia, on opening a meeting at the Elysée Palace on the spread of coronavirus virus with around 20 specialists at tea-time on Thursday, the French president Emmanuel Macron admitted: “There is a time when, we all know . . . an epidemic is inexorable anyway.”

This has been interpreted as a warning to the French people that the scheduled municipal elections at the end of March may not take place. The president did not indicate when this epidemic may occur, be it in the next week, two weeks or one month, but such an eventuality would clearly have implications for sports events in France.

Within half an hour of president Macron’s statement, it was reported that according to one expert, stage three, ie the response to an epidemic, could be decreed in “one or two weeks maximum”.

Major summer sporting events, such as the French Open tennis in Roland Garros and the Tour de France, remain in place, but this is in the hope that the spread of coronavirus can be contained and/or a vaccine is found.

As it is, the Paris marathon, scheduled for Sunday, April 5th, will be postponed, according to Le Parisien, as was the case with the Paris half-marathon, which was to be held last Sunday.

Whether or not there are any more postponements in this year’s Six Nations, the tournament organisers remain adamant that the Championship will be completed, with games re-scheduled for unspecified dates, most likely next October.

“Based on the information that is currently available, all other Six Nations matches are set to go ahead as scheduled,” said its statement after confirming the postponement of the Italian game, which means the Azzurri’s tournament is over for the time being anyway.

“As previously stated, Six Nations fully intends to complete all 15 games across all three championships when time allows. We will refrain from making any rescheduling announcements while we keep assessing the situation.”

In addition to the integrity of the tournament, and the prizemoney that goes with final standings, the matches could have a significant bearing on the world rankings, on which the 2023 World Cup draw at the end of the year will be based.

Meanwhile, this weekend’s England-Wales and Scotland-France games at Twickenham and Murrayfield on Saturday and Sunday will go ahead. The UK government’s approach toward sports events is seemingly not exactly aligned with their former European Union counterparts, witness health secretary Matt Hancock playing down the prospect of cancelling “large events”.

Speaking at the British Chambers of Commerce conference in London, Hancock said: “The science on large events is that now there is no material clinical benefit, epidemiological benefit, to cancelling events, so long as people undertake the public health measures that I’m sure you all have heard of – wash your hands and, if you have a cough or sneeze, catch it.”

The Cheltenham Festival, which was cancelled in 2001 when the foot and mouth epidemic also led to three of Ireland’s Six Nations games being re-scheduled for the autumn, is still set to proceed next Tuesday. Cheltenham racecourse authorities have advised racegoers from Ireland not to travel to next week’s National Hunt festival if they are displaying any symptoms associated with coronavirus.

1 Mesut Özil confirms Arsenal exit as he moves to Fenerbahce

Alisson denies Man United as Liverpool go four without a win 18:49
Mesut Özil confirms Arsenal exit as he moves to Fenerbahce 17:37
Here is your handy guide to sport on television this week 17:01
Dreal Deal steps up again at Punchestown despite alarming drift in price 16:37
Tanguy Ndombele’s moment of magic caps Spurs win at Sheffield United 18:57
Crossword Get access to over 6,000 interactive crosswords