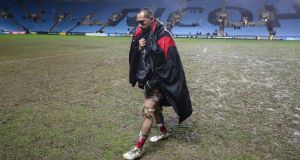 Christian Lealiifano trudges from the pitch following his side’s defeat to Wasps at the Ricoh Arena which ended Ulster’s interest in this year’s Champions Cup. Photograph: Billy Stickland/Inpho

When all was said and done at the Ricoh Arena, it felt like Ulster had finished third in a two-horse race.

Only they and La Rochelle entered yesterday with any real designs on emerging from Pool One to book a Champions Cup quarter-final spot, and yet the northern province finished up in third place having been overhauled by both the French side and Wasps.

On this evidence, it was fitting that Les Kiss’s side were looking up at the Coventry-based outfit in the final standings, so decidedly were they thumped by the Premiership side.

Four tries to one, and with the opposition to thank for their sole points, Ulster’s sky-high error count proved their undoing once again as they turned the ball over 19 times.

Having been such a distant second best in their biggest game of the year, director of rugby Kiss rejected the notion that his side weren’t mentally prepared for the challenge.

“If we’re honest with ourselves, there wouldn’t be much we’d change with our prep,” he said. “The investment by the lads, and by the coaches, was exceptional. It was a joint effort that placed us in a position to do the job but we didn’t nail the big moments on a consistent basis. A bit of accuracy was lacking. We kept fighting for sure, but you can’t give a team like Wasps the opportunities that we did.

“We paid the price, unfortunately. What we did, and how we went about our business, are things that we’ll tap into. I don’t want to sweep the disappointment under the carpet, but we’ve got to move on. It is what it is, and we move on. We’ve [still] a chance to do something in the Pro14.”

Throughout the week, his side had spoken of the advantages in kicking off last, feeling they’d be sure to know exactly what was required come the start of their game.

And while Munster’s delay meant that wasn’t strictly the case, the maths were relatively simple in that they would require at least two points to end their four-year wait to be back in Europe’s last eight.

Wasps themselves maintained the slimmest of qualification hopes, although were reliant on their former local rivals Harlequins doing the seemingly impossible and toppling La Rochelle out in France.

Needing at least four tries, the hosts went for the jugular early, knocking their penalties to the corner and were rewarded early when flanker Guy Thompson touched down from a maul that had been inching ominously towards the line from the outset.

Ulster’s mood was not helped five minutes later by the sight of Jacob Stockdale hobbling from the field, although the leg injury is not thought to put his Six Nations at risk.

When Ulster ever so briefly levelled, it was Wasps who were kicking themselves. Springbok Willie Le Roux had done well to field a slippery ball, but his pass inside to Christian Wade did the wing no favours. His own attempt to find a team-mate was even worse, straight into the arms of Louis Ludik and, via Darren Cave, set Sean Reidy away.

The flanker was stopped just short, but given the conditions slid across the whitewash to level matters.

Their parity was hardly reflective of play, and Wasps retook the lead when hooker Tom Cruse finished expertly from Danny Cipriani’s clever dink.

The conversion followed and, at 14-7, it was clear Ulster would need improvements in both the set-piece and ball retention after the turn if they were to progress.

Instead, though, it was much of the same, with the northern province squandering any rare openings they were given and spending much of the time deep in their own half.

When Le Roux scampered across Ulster’s rejigged backline and over in the corner just six minutes after the restart, Ulster surely knew this wasn’t going to be there day. It’s a feeling that’s been all too familiar of late.

With quarter-final hopes slipping through their fingers, by the time Jake Cooper Woolley powered over for the game’s final score, you imagine the visitors’ minds were already switching towards the remainder of a PRO14 campaign that now offers their only hopes of redemption this year.

Man of the match: Tom Cruse