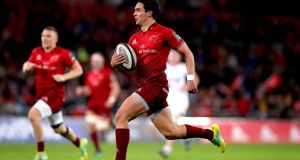 Joey Carbery: looks like being in pole position in the race to succeed Jonny Sexton as Ireland outhalf – when the latter steps aside. Photograph: Ryan Byrne/Inpho

Jeremy Staunton was so prodigiously gifted that Warren Gatland took the teenager on tour of Australia in 1999 ahead of a 22-year-old Ronan O’Gara.

Red-cheeked fumes billow from the pages of O’Gara’s 2008 autobiography, “The reality was that Staunton was on a fast track and I was being left behind. He still hadn’t played for the Munster senior team but he was being talked up as the new sensation of Irish rugby. Was I envious? Of course I was.”

“Jeremy was stronger than me but in every other way I believed I had the measure of him. I felt I had the edge over him mentally.”

History being the greatest teacher, a preview of Joey Carbery’s future requires retelling of his predecessors interlinking stories to show the dramatic difference from past to present.

Liberally speaking, rugby turned professional on this island in 1996 and, remarkably, the Ireland No 10 jersey only knows three residents; a trio of stubborn souls dominated for 23 seasons.

It was on wildfire European days that David Humphreys spearheaded Ulster to glory in 1999, heralding O’Gara’s newly minted hall of fame era which led directly to the assassin’s arrival on Croke Park sod in 2009.

O’Gara climbed inside the brains of Ireland coaches, Eddie O’Sullivan and later Declan Kidney, to surpass Humphreys (72 caps) in 2003 and deny Sexton smooth passage during the failed 2011 expedition to the World Cup summit.

But monumental Champions Cup affairs were when the true identities of these super heroes were revealed. Cameo Ireland outhalves throughout this period – Eric Elwood, Ian Madigan and Paddy Jackson – made fleeting impacts on the club scene.

With the road cleared by Madigan’s chosen exile and Jackson’s banishment to Perpignan, the heir apparent is undeniable.

Any 22-year-old needs time to learn his trade and rugby’s increasing risk removes any guarantee but Carbery – standing two years younger than Sexton the conqueror of Murrayfield in ’09 and a year shy of O’Gara’s Twickenham meltdown in 2000 – carries heavy expectation to showcase his flyhalf talents in unforgiving strongholds like Exeter and Castres.

Survival through winter, and nothing more, would inform us that Sexton’s boots are fillable should the 33-year-old’s body falter between now and the 2019 World Cup. That’s why Carbery was moved to Limerick by Joe Schmidt. That and the fact that the original understudy was supposed to be entering prime years in Belfast.

IRFU chieftain David Nucifora refuses to rule out Jackson’s return home in 2020 but, during this defining season for Schmidt’s Ireland, nobody is looking past Carbery.

Carbery’s explosiveness and passing range makes his slightness irrelevant, similar to All Black gem Damian McKenzie, but a cautionary tale is worth recalling.

Staunton was a powerful Garryowen-bred outhalf – six foot, 15 stone – and, despite only turning 19, there he sat on the bench in the Subiaco Oval in June of 1999. The moment past without him.

Staunton finally played for Ireland on that same Perth patch in 2006, with four other caps trickling his way against Samoa in 2001 (at fullback), on the 2005 Japanese tour and finally against Argentina in June 2007 when, seemingly, O’Sullivan was inviting him to nail down the vacant understudy role.

By then Staunton had flown the Munster coop, never managing to convince Kidney of his value behind O’Gara and, remember, this was before a shadow outhalf became essential.

It was also before the obvious idea of flowing resources over provincial lines became standard practice. Staunton’s only season at Harlequins (2005) ended with the Londoners’ exit from the Premiership but Wasps took him in, and there was an RDS appearance in 2008 when he fell foul of one of O’Driscoll’s abnormally brilliant tries when the ball was viciously poked from Staunton’s grasp. The end of a career that initially promised so much came at Leicester in 2012 and the 38-year-old went on to teach Maths in Castleknock College.

Point being, Irish pro rugby in its infancy tended to adhere to rigid systems and some talent was lost or went unnurtured. The trend seemed to be continuing when Ian Madigan joined Bordeaux, he’s now at Bristol, but in fact this cleared a bottleneck for Byrne and Carbery to rise and grow.

Carbery easily could have felt similar Staunton pains at Leinster, dancing from fullback to stay relevant yet ultimately languishing behind Sexton and Byrne. Attempts to shift him to Ulster, with Jordi Murphy, were wisely rebuffed but Munster’s potential was enough for this Kiwi surf child to catch the southern wave.

Now all he has to do is reveal himself as the long-awaited and rightful successor to O’Gara.

There have been mitigating factors in Munster’s, and indirectly Ireland’s, search for the next great outhalf. Kerry native JJ Hanrahan has failed thus far to strum a coherent rhythm and Tyler Bleyendaal arrived in 2015 with a serious neck injury that has cursed him ever since.

History is the greatest teacher. To put all the focus on Carbery in this uncertain era for limbs and cranium is needless – see his three-month hiatus after running into a Fijian prop – but Byrne is perhaps a better comparison to Staunton as his current situation behind Sexton is similar to what Staunton could have been to O’Gara.

“Going to Australia with Ireland was a big step for Ross,” said Stuart Lancaster. “I know he didn’t get the game time he wanted but his confidence from being in that environment has shone through since coming back to Leinster.

“He’s got the best mentors in Johnny and Felipe Contepomi that a young outhalf could want – his playing windows are going to come, and his ability to take ball flat to the line and put runners into space and holes have all come on. It’s about delivering in big games now, and he did that for us last season. I think he can make another leap.”

So who will become the next resident 10?

“I wonder is that the right question?” Gordon D’Arcy countered. “Are Ireland always destined to have an outhalf of the calibre of Humphreys, Rog and Sexton? There is a plethora of talent coming through.

“Ross is learning from the masters, Sexton and Contepomi, and the consistency he displays is a rare virtue. I am also genuinely interested in Ciarán Frawley, he could be a special player.

“Eleven months out from the World Cup, Carbery’s move seems like it will pay dividends. So, could we enter an era where we have three or four world-class 10s vying for the same spot? That would be a very nice place to be.”

Lancaster enhanced this narrative when asked to discuss a potential Carbery versus Byrne future as we settle into the old comparison Irish people so enjoy (Ward/Campbell, Sexton/O’Gara).

“It could be. I’ve also been very impressed with Jack Carty at Connacht. We made sure all our attention was on him because he is so instrumental in Connacht’s attacking shape.

“You wouldn’t rule others out but starting for your province, by the nature of the beast, [is necessary] as there is only four fly-half slots but you’ll have to persuade Johnny to step down.”

In contrast to Schmidt stating Sexton’s two years in Paris with Racing 92 impacted upon his longer-term durability, last season Lancaster half-jokingly paralleled him to a 41-year-old Tom Brady.

“I think he is starting to believe it!”

“I’m reading up on him [Brady] ,” said Sexton last summer, “and trying to figure out how to prolong my career as long as possible.”

“It seems it is going to be his decision,” D’Arcy added. “As he figures out how to become immune to every- athlete’s worst friend – time.”

Winter’s bone will reveal so much more.