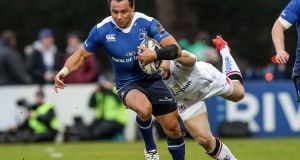 Leinster’s Isa Nacewa: “You look at what Adam Byrne and Rory O’Loughlin have done in the last six or seven weeks. They’re great to play alongside.” Photograph: Billy Stickland/Inpho

Trying to tackle Montpellier’s Nemani Nadalo, the 6ft 5in, 21-plus stone Fijian-born wing, might be equated to attempting to derail a runaway caboose. There is a physical toll to be paid with a high tariff for failure.

A solution, common to both, is to get there before momentum is generated, something that Leinster failed to do when the two sides met earlier in the pool. On that occasion the giant Fijian crossed for a brace of tries, leaving in his wake a wash of bodies.

On Friday night at the RDS Leinster get a second chance to address the conundrum, an issue that they have been working on in training.

Isa Nacewa explained: “Talk about tackle-technique, he is one player you have to understand how he plays and how he carries the ball.

“As a backline, we would have all talked about his threat throughout the week. But, Adam [Byrne, Leinster’s right wing] is a guy who has taken his opportunity and prepared well off the field. He does that every week and it’s consistent. He is as prepared this week as he is any other week.”

He’ll need help. It’s not simply about line speed in defence because Montpellier’s Springbok outhalf Francois Steyn is canny enough to counter with little chip-kicks over the top of the rushing blue line. Cutting off the supply to Nadolo is a unit skill that requires layers; applying pressure and covering behind.

Leinster coach Leo Cullen resisted the temptation to restore Rob Kearney to the team after injury and instead remain faithful to a couple of 22-year-old wings in Byrne and Rory O’Loughlin, either side of captain and fullback Isa Nacewa.

Nacewa enthused: “You look at what Adam Byrne and Rory O’Loughlin have done in the last six or seven weeks. They’re great to play along side and exciting to watch. Fingers crossed, they can do that tomorrow night.”

Cullen also acknowledged the impact that the two young wings have made and the consistent quality of performance: “The guys are showing great qualities week to week. We talk about players looking to get better, to self-improve.

“They are very critical of themselves; it’s just trying to give that environment where they can learn, progress and get confidence in terms of trying to progress as players. They are showing good traits. They have been a pleasure to work with.”

The facile nature of Leinster’s Pro12 victory over Zebre last week has lent substance to a notion that the lack of a hard, physical blowout ahead of the Montpellier game could prove counterproductive.

Cullen smiled: “I’m always worried. You come off a game like that against Zebre and you would have concerns but the players, having played this team [Montpellier] already, are fully aware of the threat that they pose.

“It was a frustrating game over in France because we didn’t give a good account of ourselves. The conditions were tricky and we didn’t manage the game particularly well but Montpellier are a pretty good team as well and they made life uncomfortable for us.

“There are definitely things that we can manage a hell of a lot better so it has been reasonably easy to focus the minds for all of us, coaches and players. It is a big challenge. Montpellier might not have the reputation of Toulon, Toulouse and the Clermont but anyone that studies the Top 14 can see the threat that they have been building.

“Jake White is a pretty astute guy,” Cullen said before pointing out that he had blended a side including some players from his time with the Brumbies and several former Springboks, some of whom he guided to a World Cup triumph in 2007.

He continued: “They are very dangerous so there is enough in that to prepare our minds. In terms of how well we have prepared, we have been building towards this stage. They are such key games and it will be such a huge challenge.

“It’s nice to be here in the RDS and it is certainly a better feeling than last year when we had gone zero from four in our pool games at this point. It’s good to have a few more points on the board.”

They’ll be hoping for four or five more to add to that tally and a guaranteed place in the quarter- finals when referee JP Doyle blows the final whistle on Friday night.

1 CVC cuts Six Nations offer by half to €165m as talks continue on new deal
2 Jack Charlton era made GAA sit up and realise its greatest strength
3 Game Changers: Living beyond fear puts Alex Honnold above all others
4 Georgia and Fiji in line to join Six Nations sides in eight-team tournament
5 Game Changers: Gary O’Toole took a stand when others turned their heads
Real news has value SUBSCRIBE

Derby wins moves Atalanta to second in Serie A 08:53
Mikel Arteta warns Arsenal must invest significantly to compete 08:15
Frank Lampard: top four race will come down to ‘focus and attitude’ 08:04
Chelsea remain in third after Norwich win; GAA dressing rooms to remain closed 07:25
Jack Charlton era made GAA sit up and realise its greatest strength 07:00
Crossword Get access to over 6,000 interactive crosswords