Connacht chalk up another memorable night at Sportsground 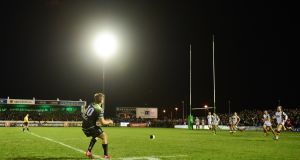 The team that refuses to die just keeps on giving. Connacht were all but out for the count here, literally as well as figuratively, before producing a last-ditch escape of Houdini-like proportions. For a dramatic endgame and as a one-off win, the Sportsground cauldron has rarely experienced anything quite like it.

To some degree, fortune favoured the brave. Connacht had more ball, passed more and kicked less, never flinching in their desire to play on the edges, literally. Finally, they got off the floor to throw one last flurry of punches when it looked as if Wasps had out-muscled them with 11 unanswered points to turn a 13-7 interval deficit into an 18-13 lead.

Pretty much nothing had gone Connacht’s way in the second-half. The Wasps tighthead Jake Cooper-Woolley escaped censure for a tired but dangerous no-arms collision with the counter-attacking Niyi Adeolokun, and to compound this the introduction of a no-doubt frustrated and fired-up Marty Moore saw Wasps tellingly turn the screw at scrum time.

Jimmy Gopperth’s 45-metre kick from the ensuing scrum penalty hit the post and that turned out to be hugely significant, especially as Carty had nailed one from the exact same spot in the first half. Even so, after Bundee Aki had won a turnover scrum from another siege, the Wasps pack (helped by Matt Mullan being allowed to scrum at an angle) shoved Connacht off their own ball for replacement scrumhalf Dan Robson to put Josh Bassett over. Gopperth, critically, also missed his touchline conversion.

As well as those kicks, some outstandingly resourceful scrambling defence had also kept Connacht in the game, and thus meant they were still within a score entering the final throes.

Critically too, perhaps, referee Jérôme Garcès promptly departed with a tweaked hamstring to be replaced by his assistant Mathieu Raynal. Fijian debutant Naulia Dawai then earned what seemed like a last chance when charging down Dan Robson’s kick, only for Guy Thompson to then rip the ball at the breakdown in the last minute.

Wasps were running down the clock, and were about to recycle one last time through Thompson when Sean O’Brien shot up and Adeolokun, helped by John Muldoon, poached for a penalty, the whistle going literally as the match clock hit 80 minutes.

The penalty was a fair call by Raynal, but as an EPCR statement confirmed yesterday the replacement referee was wrong to permit Connacht to kick the penalty into the corner given the 80 minutes were up. That amendment to the law, allowing a team to do so, comes into effect in the new year.

That was their lucky break, and a sustained drive culminated in Dawai, with additional help from Bundee Aki, plunging for the line. Cue Carty’s match-winning conversion, and a wonderful story of personal as well as a collective redemption for a talented young home-grown player who, at a stroke, exorcised this season’s place-kicking demons.

You really couldn’t make it up.

Pat Lam was full of praise for his players. “That is the sort of culture we have,” he said. “We understand we are in a performance industry and the only currency the boys have is the performances they are judged on. But the performance comes on the back of the work. Guys are going to make mistakes. It’s high-level stuff.

“Jack was an academy player when I first got here and I have watched his development and it has been ongoing. I see he takes it [the criticism] to heart but there is only one way you can go: just dust yourself off, get up and start doing the work. There is no point feeling sorry for yourself. It’s just using that motivation to drive you more at training.”

Lam admitted he doesn’t normally watch goal-kicking practice but did on Friday when Eric Elwood was working with Carty, by then their only recognised kicker left standing.

“I saw the work that was being put in there as well. I said ‘that’s fine and I’ll leave it to those guys.’ It’s a tough job being the goal-kicker and I am just so pleased he got a great result.”

Conceivably, this could prove a career-defining moment for Carty, but at the very least it should only stand to him. “Without a doubt,” said Lam. “We know there are outhalf issues right throughout the country and he is now racking up a lot of games. That was the plan when I arrived here. Dan Parks was here and Jack was the young guy and he learned off Dan but he needed to start racking the games up because he is a local boy from Connacht.

“He is an Irish 10 and I know you can look back many times when people were having a go but it’s a tough job, that outhalf position. The only way he is going to get better is with experience. He has had battles. He had the challenge of [AJ] MacGinty. He has had injuries. We all know that his spleen is gone. He has had a lot of knockbacks but he has also worked hard to get back there and it’s a great day, one that he can put in reserve and use the experience to make him go to another level as well.”

As for the other hero, the 29-year-old Fijian debutant Dawai, his late registration last week looked odd given he’s a backrower and Connacht are down to the bare bones in their backline, but Lam revealed Dawai’s pace is such that he was also providing emergency backline cover.

“I was planning on using Naulia next week but we have the injuries to Jake and a couple of others so he got on the bench and also he has got a lot of pace,” said Lam. “I thought with two backs he could cover the back line as well. But just the energy he brought. We lost that ball and he got the charge down and got us a chance back.

“When we were looking at [signing] him, he scored a lot of tries on the back of the Otago maul so he is used to being back there and he had a lot of assistance from Bundee Aki in the middle of the maul too. I am just pleased for him and the rest of the guys.”

Entire Newcastle squad to self-isolate amid Covid-19 outbreak 07:35
Comfortable wins for Munster and Ulster; Full panels can now attend GAA matches 07:24
Gerry Thornley: Maybe the new Ireland could do with a little of the old detail 06:00
Kevin McStay: Beautiful chaos of All-Ireland to end in a Dublin-Mayo final 07:57
David Nucifora confident IRFU will keep majority of players they want 05:30
Crossword Get access to over 6,000 interactive crosswords