Racehorse owners to return to tracks in Ireland on Monday 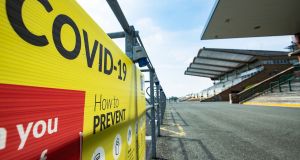 Racehorse owners are allowed go racing again for the first time since March on Monday.

An easing of coronavirus restrictions that allows 200 people onto racecourses will see owners attend Monday’s two fixtures at Listowel and Fairyhouse.

Racing has been held behind closes doors since June 8th and the return of owners to tracks has been a “priority” for Horse Racing Ireland since then.

Fairyhouse will also welcome back two apprentice jockeys, Shane Crosse and Mikey Sheehy, who are returning after 10 days in isolation following positive tests for Covid-19.

Both have two rides at the Co Meath track which has the Listed €40,000 Ballyhane Blenheim Stakes on the card.

HRI has been liaising with owners of horses running on Monday. Two owners per horse are permitted access once they’ve passed the various health-screening protocols which are operated by the Irish Horseracing Regulatory Board.

“It has added people to the system but it has all been pretty straightforward. The whole system has bedded down over the last few months,” said the IHRB communications manager, Niall Cronin.

Monday’s other 440,000 event is Listowel’s Lartigue Hurdle which has 17 four-year-olds lining up.

Trainer Ray Cody won the race last year with Razoul who emerged on top despite being 7lbs out of the handicap proper.

Cody’s filly, Guinevere, is only 1lb ‘wrong’ at the bottom of the weights this time and the Galway winner has both Rachael Blackmore and first-time blinkers on her side.

A total of eight two-year-olds line up for the Blenheim Stakes at Fairyhouse.

They include the shock 66-1 Round Tower Stakes winner New Treasure who has to concede weight all-round for that Group Three success.

It will be very different going from the testing conditions he won on at the Curragh and conceding 10lbs to the six length Navan winner Dense Star may prove a tough ask.

Joseph O’Brien’s filly was winning for the first time in seven starts and still looks to be progressing.

Her stable companion Prairie Dancer, with Shane Crosse on board, also looks to have a good chance in an earlier maiden.