Ascot Chase is on Coney Island radar ahead of Gold Cup 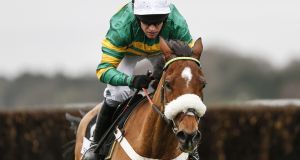 With confirmation on Monday that Thistlecrack is ruled out for the season through a stress fracture to his pelvis, the Gold Cup picture has become even more unclear, especially on the back of the reigning champion Sizing John’s disappointing run over Christmas.

Despite just four starts over fences to date, Coney Island is a general 10-1 shot for the Gold Cup on the back of his victory in a three-runner race at Ascot just before Christmas.

Leopardstown’s €200,000 Unibet Irish Gold Cup on Day Two of the new ‘Dublin Racing Festival’ is one potential target for Coney Island’s next start. But the 2016 Drinmore winner could wait instead for a return to Ascot a fortnight later.

McManus’s racing manager Frank Berry has confirmed the Grade One Betfair Ascot Chase on February 17 – a race run over two miles and five furlongs – is the other top-flight option for the Gold Cup’s ‘dark horse’.

Berry said on Monday: “It will either be Leopardstown or Ascot, I’d say, and we’ll decide closer to the time. He’s had only four races over fences so we’ll be trying to give him the easiest option we can.

“He missed a lot of last year and missed out on a lot of experience. It’s hard to catch up on that. But he has come out of his last race in good form.”

The King George winner Might Bite shortened a little as Gold Cup favourite on the back of Thistlecrack being ruled out of the Gold Cup for a second year running.

A spokesperson for Thistlecrack’s trainer Colin Tizzard reported: “He was a little bit stiff behind after the King George and he’s been off and had x-rays and bone scans. It’s gutting.

“He ran a screamer. He jumped really well and we were getting excited the old Thistlecrack was still there. We were going for the Gold Cup. Hopefully he’ll have his box rest and come back next season.”

Coney Island’s old novice foe Our Duke is on course to make his own return to action in the Unibet Irish Gold Cup.

Last year’s Irish National hero, who beat Coney Island in a Grade One at Christmas 2016, is continuing his recovery from a back problem discovered after a lacklustre run at Down Royal in November.

“The plan is Leopardstown at the moment. I schooled him after racing at Punchestown last week and he felt fantastic,” reported his rider Robbie Power.

“We’ll get another racecourse school into him between now and then and if all goes well, he’ll go to Leopardstown.

“It could be a blessing. Going to Cheltenham and the spring, you don’t want to have had a hard winter. Maybe missing a few tough battles will stand him in good stead later in the year,” he added.