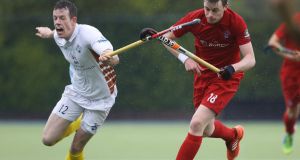 Prior to Christmas, Canning was invited to South Africa to play as part of a World Stars team as part of the Pro Series Indoor competition, lining out alongside a number of indoor world cup and European champions.

And the experience has helped him elevate his game in the often overlooked version of the sport in Ireland, netting four times in the final.

Rovers led 2-0 at the half-time break with Canning scoring twice – once from a corner, once from a penalty stroke – to put them in control. His third extended the lead before Railway stormed back with Kenny Carroll to the fore, making it 4-4 midway through the second half.

But a pair of Ben Walker goals inside a minute restored a 6-4 lead and they were out of range from there on, Canning capping the win with his fourth goal.

Last weekend, Railway had beaten Rovers 7-4 to win the Leinster title but the respective call-ups to the Irish senior men’s outdoor squad had implications. Jeremy Duncan was the key man for the Sandymount club with five goals in that final and they missed that cutting edge.

Rovers were without defenders Luke Madeley and Daragh Walsh for the same reason but their replacements, Eckart Geyer and the vastly experienced Peter McConnell, actually strengthened their hand.

On Saturday outdoors, meanwhile, the expected sides pushed on in the Leinster Senior Mills Cup. Monkstown won 3-2 against Railway Union in the battle between the two national league sides. It featured a welcome return for Richard Sykes who scored after a long time out injured.

Three Rock found things harder than expected in a scoreless first half against Rathgar before prevailing 4-0. Glenanne scored six first half goals in a 7-2 win over Clontarf while Corinthian completed the semi-final line-up with a 4-1 win over Kilkenny.