Underdogs enjoyed a magical journey, only to be beaten by Netherlands in the final 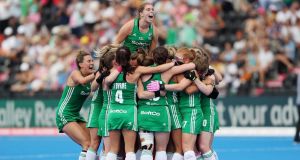 Several hours after the Sunday evening hooter had sounded in the Lee Valley Stadium in Olympic Park, east London, Carlien Dirkse van den Heuvel walked into The Bull pub beside the hotel in which her side, the Dutch women’s hockey team, were staying.

It was more than four hours after the match but van den Heuvel had not changed and was still in her orange and white national colours, her headband on, still wearing the match shirt with her number on her back. The Netherlands had just beaten Ireland in the World Cup final and she had the trophy gripped in one hand.

It was the Netherlands’ record eighth time winning the World Cup in 14 editions of the tournament going back to 1974, when the Dutch also won. About half of her team-mates, all still in their playing gear, crowded around the bar.

But it was just after 10.30pm. The team captain, with the World Cup now under her arm asked for drinks for her players. “Sorry we’ve already served last drinks, we’re closed,” came the replay. Stoically the Dutch players accepted the English Sunday closing time and trailed out into the vast Westfield Shopping Centre, bathos dripping from the short exchange. Another early night.

The Irish team were nowhere to be seen. They had ripped it up into central London for a planned celebration with family, sponsors and friends. The team that had lost the final would get a charter flight to Dublin the next day and end with a celebration in Dame Street in front of thousands, the attention, the acclaim an unforeseen and surreal experience for the group of players.

What the Irish women achieved over two weeks in London was barely explicable, at least in terms of where the team had come from in previous World Cup events and their place in hockey’s world order.

But they understood they had achieved something of magnitude and unlike the Dutch, who were cool, almost perfunctory about again becoming the world champions, Ireland reaching the final in oven heat and blinding London sun had lit a fuse. Hockey had never done anything like it before.

For the squad of 19 players, it was the magical journey to the World Cup final and their charmed performances in two penalty shootouts that invited national curiosity and for just a nanosecond of time entered public consciousness and stilled the nation.

Ireland had begun the tournament as underdogs and the second lowest seeds. They were ranked 15th out of the 16 teams taking part with a squad made up of part-time amateur players and facing other teams where the players were full-time or professional. Only the Italian team ranked at 17th in the world were lower than Ireland.

In the three previous World Cup tournaments in which Ireland had qualified the team never finished in the top half. They finished 12th in 1986, when it was held in the Netherlands, came 11th in 1994, the year Ireland hosted the event in UCD, and finished 15th the last time Ireland qualified in 2002, when Perth, Australia were hosts.

For the intervening years between 2002 and 2018, there were three World Cup events in Madrid, Spain, Rosario in Argentina and The Hague in 2014 for which the Irish team did not qualify.

But there had been major changes in the way hockey had been run during those relatively fallow years with more State money flooding in, a greater emphasis and importance placed on the traditionally marginalised women’s sports, a culmination that allowed Irish players much more face time on the training pitch. Squad behaviour had also become semi-professional in the week-to-week preparations leading up to London.

Graham Shaw was also a significant influence. A tough coach, it was the former international player from Glenanne who said that one of the first people with whom the team psychologist had to have a conversation with was him.

Shaw was known for his often abrasive straight talk and what he demanded from the players. Sometimes he admitted he went too far and had to tone down his energy levels and how he behaved with his players.

Part of that was because he was as a coach as he was as a respected international player, hungry to win and competitive up to and often over the line. He also adapted the Irish team to play to their strengths, which was more of a defensively organised side that could hurt teams in counter attack.

With Ayeisha McFerran, among the best goalkeepers in world hockey, Ireland also had a calming influence when it came to one-on-ones, the tournament’s way of deciding matches that ended in draws in the knockout phase.

The competition was run as four pools of four teams. The first phase was to win the pool and go straight into a quarter-final. Ireland did just that when they opened by beating the United States 3-1 with Deirdre Duke scoring twice.

Ireland then faced India in the second match and with a goal from Anna O’Flanagan after 13 minutes it was enough for the win. Because pool favourites England had drawn with the USA and India, the two Irish wins confirmed Ireland as pool winners and quarter-finalists for the first time in history.

It was also in the pool phase that the quality of the Dutch side’s scorched earth policy shone through and earned them an “avoid at all costs” tags. They faced Italy, South Korea and China and over the three games scored 26 goals. They schooled China 7-1, crushed the Koreans 7-0 and ripped through the Italians 12-1 to cruise into the last eight. Their closest rivals in front of goal was Spain, who scored 10 goals in the pool phase. That’s how far the Dutch were ahead.

But the Irish journey was just beginning as Megan Frazer, the team’s most influential player over the previous years, struggled with injury. Her final capitulation would score another running narrative with Emily Beatty on holidays in the west of Ireland flown in 24 hours before to play in the final.

But as the tournament unfolded, Ireland were drawn to meet India again in the quarter-final. Despite being ranked 10th in the world, Shaw and his team were comforted by the earlier 1-0 in the pool game. There was no fear factor.

The USA, who Ireland had also beaten, had a world ranking of seven, rendering the rankings as essentially meaningless, at least from an Irish point of view as every team from the quarter-finals on were ranked higher.

Her temperament and tactical simplicity were supreme. McFerran confronted the Indian strikers, forcing the pressure on to them every time. She challenged them to beat her and didn’t err. There were no wild rushes forward or dramatic dives. Her foot speed and ability to shadow the attacking player and close angles without lunging forced all the tension back on her opponents.

That, combined with the Irish chill factor, drove the team on. Róisín Upton, Ali Meeke and Chloe Watkins scored for Ireland with McFerran immaculate. She saved three out of four Indian penalties.

But it was Watkins’ break across the pitch after netting the decisive score that catapulted Ireland into a greater public consciousness. Unbridled joy. Nothing planned or choreographed. A kid again and a team that didn’t know how to react, didn’t know how to behave. So they threw their sticks away and threw themselves into each other’s arms.

Few could have anticipated a similarly emotionally charged finish to their World Cup semi-final against Spain. But in a blur of a few days O’Flanagan was scoring her second goal of the tournament with Spain equalising to finish 1-1 to set up another Mexican standoff between attacker and goalkeeper.

So again it was a shootout, again this unfamiliar deciding routine that people around Ireland had begun to understand. Just one side of the stick, just eight seconds to do it. Again they lined up. Again Ireland looked to McFerran to give them opportunity, hold off a few of the Spanish forwards and believe in the characters that had gotten them this far. So she did. The 22-year-old from Larne saved three times as the shootout spilled into a second rotation of five players, leaving it this time to Gillian Pinder.

Pinder hadn’t been selected to take the penalties against India but she was far from overwhelmed.

“I don’t have a plan when I step up – one of the few who doesn’t – just go in, move her a bit and the chance opened up,” she said afterwards as she stretched Spain’s goalkeeper for a second time to propel women’s hockey and Irish team sport into a dimension they had never before been in.

Again the reaction was a body bumping rush of green with more streaming tears, sticks hurled in the air, sticks hurled over heads as the Spanish team, to a player, collapsed to the ground in disbelief that Ireland had struck a second time.

Ireland against the Dutch in a World Cup final. Shaw, who would leave within a year to take up a coaching position with New Zealand, stood with his head in his hands barely able to take in the achievement.

The pitch then turned into a makeshift Mardi Gras enclosure as the music was pumped up and families with their frayed nerves and sun burn poured down from the terraced seating and onto the side railings.

There was an innocence to it all and a sense of a team of women taking steps into a place that no one had ever been before. There was also a strengthening connection with people who had never seen hockey before, that they were on a learning curve too and enjoying its exotic strangeness and the incredible stimulation of going deep into a World Cup. There was the take away for other sports too to never, ever under-value self-belief.

Finally the Netherlands were too much, too magnificent and would win their eighth World Cup with six goals. They would go with the trophy and gold medals to The Bull and not get a drink as Ireland partied with their silver in the city. They were in a different lane. For 15 days in London they always had been.