‘Personally I’d have a bit of an issue if that was going on in my country, but there we go. We’ll just carry on.’ 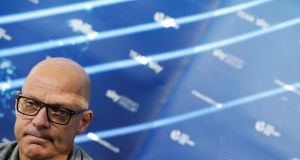 Team Sky manager Dave Brailsford: “I’m not sure they’d have liked their football players being spat at in Russia - I’m sure there would have been a word or two about that.” Photograph: Regis Duvignau/Reuters

Team Sky’s principal Dave Brailsford expects the cascade of vitriol directed at Team Sky to continue all the way to Paris and has condemned Tour de France organisers for not doing more to stop it.

In the past fortnight four-time winner Chris Froome has been cuffed by one fan, spat at by another, and had an unidentified substance thrown at him, while Geraint Thomas has been persistently booed when presented with his yellow jersey. However Brailsford insisted such behaviour only makes Team Sky more determined to succeed.

“We know we’re going to get abuse and we know that not a lot is going to be done about it,” he said. “But that’s part of winning. The more it happens the more you determined you get to win. We don’t react to it. We’ll smile and try and win the race.”

Brailsford also revealed for the first time that the team’s young marketing executive, Emma Kennaugh, had also been spat at - and directly criticised France fans for their behaviour.

“It’s interesting that we’ve just done the Tour of Italy and Chris’s case was open and the Italians were fantastic, and the Spanish the same,” he added. “It just seems to be a French cultural thing.

“I’m not sure they’d have liked their football players being spat at in Russia - I’m sure there would have been a word or two about that. But it’s OK to spit on us, and on our staff? Emma Kennaugh is 21. She’s trying to drive around France and it’s very intimidating for her to be spat at.”

Many will agree with Brailsford’s assessment but at the same time his comments are bound to inflame the situation further when the race resumes after Monday’s rest day. “I don’t think it’s going to stop,” he said. “I’m not too optimistic on that front. We accept it and we have to make a decision about how to behave. We’re trying to remain dignified, we’re trying not to react and we’re trying not to get distracted by it. But I don’t think spitting and throwing things has a place in professional sport or in everyday life but it seems to be the thing that’s done here.

“Personally I’d have a bit of an issue if that was going on in my country, but there we go. We’ll just carry on.”

Brailsford also accepted that the behaviour of Gianni Moscon, who was kicked off the Tour on Sunday after raising his fist towards the French rider Elie Gesbert, would probably only make things worse.

“It’s certainly not going to calm things down,” he said, smiling ruefully, before again appearing to criticise race organisers and spectators. “The Tour de France is promoted as the world’s greatest annual sporting event, and if you want the best international riders to come to your country then maybe treat them with a little more respect.”

Brailsford will decide how to discipline Moscon after the race finishes on Sunday but played down the affect it would have on the team during the next week. “We will make a decision about what to do with him after the race, look at processes and go from there,” he added. “Thankfully losing him will not affect us as much as it would have done earlier in the race.

“The stages where it would really have stretched us are probably behind us so its impact on the team will mean that some riders will have to do a bit more work. The level of impact it has on the race, I’m not so sure.”