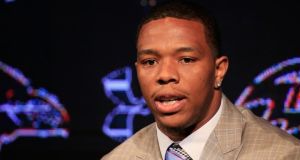 Running back Ray Rice of the Baltimore Ravens addresses a news conference with his wife Janay (not pictured) at the Ravens training centre. Photograph: Rob Carr/Getty Images

Ray Rice appealed his indefinite suspension from the American National Football League (NFL) for domestic abuse as two sponsors expressed concerns about how executives of the most popular US sport have responded to the case.

The former Baltimore Ravens running back was banned last week after a February video went public showing Rice punching his fiancee in the face and knocking her unconscious.

Rice, 27, originally was suspended two games by the NFL in July, a discipline widely criticized as too lenient. Commissioner Roger Goodell instituted harsher penalties for players involved in domestic-violence cases in August.

The NFL Players Association said in a news release last night that it had filed an appeal of the indefinite suspension, which it said was imposed by Goodell after “a lack of a fair and impartial process.”

“We have asked that a neutral and jointly selected arbitrator hear this case, as the commissioner and his staff will be essential witnesses in the proceeding and thus cannot serve as impartial arbitrators,” the NFLPA said.

Announcement of the appeal, which the NFLPA said requires a hearing date to be set within 10 days, came as two league sponsors expressed concern about the NFL’s handling of the case.

Anheuser-Busch InBev NV, the league’s official beer sponsor, said it was “disappointed and increasingly concerned by the recent incidents that have overshadowed this NFL season.”

The Leuven, Belgium-based company said in a statement on the Anheuser-Busch website that “we are not yet satisfied with the league’s handling of behaviors that so clearly go against our own company culture and moral code.”

Anheuser-Busch’s Bud Light replaced Coors as the official beer sponsor of the NFL in 2011. Spokesman Nick Kelly said in an e-mail that he could not comment on details of the contract.

McDonald’s Corp., the world’s largest restaurant chain, released a statement saying “domestic violence and abuse are unacceptable behaviors and have no place in sports, or anywhere.

“As a family brand, we’ve communicated our concerns to the league, and we expect it to take strong and necessary actions to address these issues,” McDonald’s said. NFL spokesman Brian McCarthy said: “We understand. We are taking action and there will be much more to come.”