Conor McGregor ditched the suits for a furry white coat worn over a bare, tattooed chest 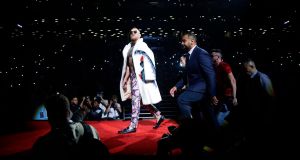 The Floyd Mayweather Jr. and Conor McGregor world media tour stormed into New York on Thursday with the fighters unleashing more profanity-laced attacks on each other as they looked to build up interest in their light middleweight boxing bout.

On the third stop of four-day, four-city barnstorming blitz to promote their August 26th Las Vegas clash, the witty barbs that characterised their exchanges Los Angeles and Toronto were replaced by what appeared to be real venom.

Mixed Martial Arts (MMA) champion McGregor traded in the stylish suits he wore on the previous two legs of the tour for psychedelic pants and a furry white coat worn over a bare, tattooed chest.

He strutted imperiously onto the Barclays Center stage to an Irish ballad and thunderous applause before flexing his muscles, striking poses and rattling off a dance step or two as he waited for the undefeated boxer.

It looked for a moment as if the circus was going to take a turn for the worse when McGregor, who addressed the 40-year-old Mayweather as “boy” in Toronto, let a howling crowd know he did not take the charges of racism seriously.

“A lot of media have said I am against black people, that’s absolutely ... ridiculous,” McGregor roared.

The Irishman, who at times during the earlier stops had appeared to get under Mayweather’s skin, had no such luck in Brooklyn, where the American ignored the jibes and took selfies while McGregor barked in his ear.

McGregor is expected to be the aggressor in the ring against the former five-division world champion to make up for his lack of boxing experience and has played that role throughout the tour, which wraps up on Friday with a stop in London.

Famous for his knockout power in the MMA cage, McGregor managed only glancing blows on Thursday as Mayweather, widely regarded as one of the best defensive fighters of all-time, side-stepped and returned fired by dubbing McGregor a quitter.

“(He) didn’t quit once, (he) didn’t quit twice, (he) quit three time,” Mayweather screamed with another volley of profanity, referring to McGregor tapping out in his three career defeats - in the UFC.

While boxing purists have denounced the fight as nothing more than a laughable cashgrab it has nonetheless captured the fascination of many fight fans.

McGregor has been the undisputed favourite at each stop on the media tour, and can expect more of the same in London, but few give him any chance in the ring against one of the most skilled and tactically astute boxers of all time.

The underdog role is one that fits McGregor like one of his tailored suits, however, and he recalled similar predictions before he beat Jose Aldo to win the UFC featherweight title in late 2015.

Mayweather, who brandished a cheque for $100million in LA and in Canada carried out a backpack with a wad of cash in it, took to draping himself in an Irish flag for the second evening running. The American was received with more chants of “pay your taxes” — in reference to reports he has asked the Internal Revenue Service for more time to settle his 2015 tax bill.

McGregor then took aim not only at Mayweather’s financial situation but also rapper 50 Cent. The mixed martial arts star finished by saying: “To come back here, where I made history, became the first fighter in history to win two UFC titles simultaneously.

“Thanks to you all, I’m blown away by the support.”

Mayweather, responded by asking for the music to come on before labelling McGregor “a stripper” and throwing cash all over the stage. McGregor quickly noted, they were only one dollar bills.

The pair are scheduled to finish their media tour at SSE Wembley Arena at 7pm on Friday.