Holder Nadal to face Djokovic, and Murray to take on Ferrer, in men’s quarter-finals 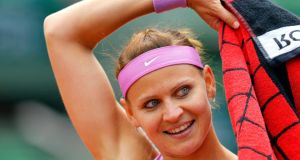 Lucie Safarova reacts after winning against Maria Sharapova during their fourth round match at the French Open. Photograph: Robert Ghement/EPA.

Maria Sharapova’s defence of her French Open title came to a premature end yesterday when she was beaten 7-6, 6-4 by the Czech left-hander Lucie Safarova in the fourth round. The number-two seed, who won the title here in 2012 and also reached the final in 2013, struggled with a cold and cough but was outplayed by a brilliant Safarova, who is into the quarter-finals here for the first time.

It was a disappointing end for Sharapova, but Safarova fully deserved her victory, never allowing her opponent to dominate from the baseline. Taking the ball early and whipping up some wicked angles from her wristy forehand, the Czech held firm under pressure and clinched victory with one of a total of 34 winners.

Sharapova had won five of their six previous meetings, but struggled from the start, dropping serve for Safarova to lead 3-1. Sharapova broke back for 3-3 but never looked comfortable, and when the set reached a tiebreak, it was Safarova who dominated, winning it 7-3.

When the Czech took a 3-0 lead in the second set, the match looked over, but a double-fault helped Sharapova get back to 3-2. The two stayed on serve to 5-4, when Sharapova herself double-faulted to hand the Czech a match point.

A brilliant defensive lob from the Russian, followed by a netted forehand, saved the match point, but two stunning forehands gave Safarova her first win over a reigning world number one and set up a clash with Garbiñe Muguruza of Spain.

Muguruza beat Flavia Pennetta of Italy 6-3, 6-4 to make the last eight for a second successive year.

Sharapova refused to blame illness for her defeat. “I don’t like to talk about it, and I don’t think it really makes a difference,” she said.

He won 6-4, 3-6, 6-3, 6-2 in just under three hours, but made life difficult for himself by not taking two wonderful chances in the second set that would have lessened his workload before the much tougher assignment that awaits him tomorrow in the form of David Ferrer.

“Throughout the course of the match, I was creating many more opportunities than him,” Murray said. “I wasn’t overly concerned. I just had to take my chances when they came. I did that in the third and fourth sets.”

Chardy said beforehand that he did not like it that Murray had withdrawn in Rome, claiming fatigue, after beating him in his only match. “We all get tired,” he said.