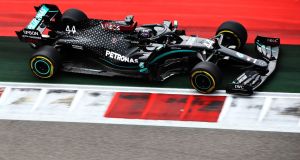 Lewis Hamilton survived a dramatic qualifying session to put his Mercedes on pole position for the Russian Grand Prix.

Hamilton came within less than a second of falling at the second hurdle — after Sebastian Vettel crashed out in his Ferrari — before making it though to Q3 and then obliterating the opposition.

Hamilton will join Michael Schumacher with the most number of victories in Formula One history should he triumph for a 91st time on Sunday.

After posting a time of one minute 31.304 seconds to finish on pole by over half a second, Hamilton was summoned to see the stewards for failing to follow the rules when he rejoined the track at the second corner in the opening exchanges.

The Mercedes star avoided further action but was told he will be dealt a five-second penalty if he repeats the same manoeuvre during Sunday’s race.

It means Hamilton will line up on pole in Sochi as he goes in search of Schumacher’s record.

Vettel’s high-speed crash in Q2 led to the most exciting qualifying session of the season in front of tens of thousands of fans as spectators returned to watch F1 for the first time this year.

The quadruple world champion lost control of his Ferrari through the right-handed Turn 4 before slamming into the barriers.

Charles Leclerc was running behind his team-mate and almost collected Vettel, who rebounded off the wall and into the middle of the road.

“Oh my God... that was very very close,” said Leclerc as he ran over Vettel’s debris.

The session was red-flagged with just two minutes and 15 seconds of Q2 remaining. Hamilton was only 15th after his time was deleted for exceeding track limits.

The cars lined up in the pit lane ahead of the restart and Hamilton was eighth in the queue. The British driver then provided himself with an even greater challenge after he ran off the track as he left the pits on cold tyres.

The message arrived from his race engineer Pete Bonnington to get a move on, but Hamilton executed the timings to perfection, crossing the line with less than one second to go, affording him clean air in his one attempt at progressing to Q3. Hamilton finished fourth and a shock second-stage exit was avoided.

Hamilton then returned to post a dazzling lap to secure pole 96 of his career.

“Firstly, I have got to say hi to all the fans that are here,” said Hamilton. “I have missed them this year and I cannot tell you how great it is to see people.

“It was one of the worst qualifying sessions with my heart in the mouth the whole way.

“The time was taken away from me after I ran wide. I wanted to stay out and do a banker lap but the team told told me to come in and then the red flag came out.

“It is nice being on pole but here is the worst place because of the tow to the opening corner so I am most likely to get passed at the start tomorrow.”

Sergio Perez finished fourth for Racing Point ahead of the Renault of Daniel Ricciardo. Carlos Sainz was sixth for McLaren, with Lando Norris two spots further back in the other car.

Ferrari’s Charles Leclerc will start outside the top 10 in 11th, while George Russell continued to impress, qualifying 14th for Williams.

1 Gerry Thornley: After 32 weeks the Six Nations is back up for grabs
2 Stockdale and Ringrose on board with expansive Irish game plan
3 Extremes of sweet and sour for Solskjaer as Man United show signs of revival
4 Bennett girding his loins for impossibly unpredictable Vuelta
5 GAA expected to go ahead with championship under Level 5
Real news has value SUBSCRIBE