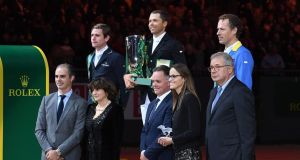 Irish riders recorded some excellent results in Geneva on Friday, with a win and third-place finish in the early evening’s indoor cross-country competition and a runner-up spot later in the night in the 19th running of the Rolex International Show Jumpers Club top 10 final.

Ranked No 8 in the FEI world rankings, Co Offaly’s Darragh Kenny was one of three riders who was clear in the first round of the Rolex final, a 1.60m competition, and, second last to go in round two, again went clear to lead briefly with his own and Ann Thompson’s 10-year-old Zangersheide stallion, Romeo 88 (42.54).

Disappointingly for Kenny, he had to settle for second place when the USA’s Kent Farrington, who was last to jump, also completed a double clear with Austria 2 (40.32). Germany’s Christian Ahlmann, who too left all the poles intact in both rounds with Clintrexo Z, finished third having picked up a single time penalty in round one.

Kenny, who, last Saturday, was crowned Irish international rider of the year at the Show Jumpers Club’s annual awards night, earned roughly €105,000 for his efforts.

Tipperary-born Irish international event rider Padraig McCarthy was second to jump in the 16-runner indoor cross-country competition and, with just six-time penalties, looked on course to follow up on his win last year with Tatiana Brent’s 12-year-old mare, Rosemaber Lancuest.

However, the Devon-based competitor, who won team and individual silver at last year’s World Equestrian Games in North Carolina, was pushed down into second when the penultimate rider, his Tryon teammate, Cathal Daniels, picked up just four faults on Alcatraz. McCarthy then had to settle for third when France’s Karim Laghouag, who won a similar competition the previous weekend in Paris, was awarded six time penalties to finish second with Punch de l’Esques.

This was a second win in just three starts in the indoor cross-country season for Galway native Daniels and Sarah Hughes’s Alcatraz which was ridden by Britain’s Alexander Bragg when second in Geneva last year. Daniels (23), who is based in Co Kildare, won with the 14-year-old Dutch Warmblood gelding in Stuttgart where McCarthy finished second.

1 Ashleigh Barty now living up to all her earlier promise
2 Mourinho insists there is no problem between him and Danny Rose
3 Felix Jones expects De Allende and Snyman to boost Munster
4 Gerry Thornley: Saracens very late to apologise for repeated cheating
5 Donegal’s Yvonne Bonner very much up for Down Under
Real news has value SUBSCRIBE