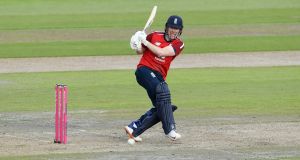 Eoin Morgan led England to a marmalizing victory over Pakistan at Old Trafford in the second T20, with 66 off just 33 balls, sweeping, throwing the bat, even outside edging for whoppee in a fearless chase - though not one without moments of unease.

The five-wicket victory with five balls to spare was England’s highest run-chase against Pakistan, the highest run chase by any team against Pakistan. This shadow-England side, a Covid oddity, continues to play in their captain’s image.

Old Trafford filled full houses for World Cup games just a year ago, a skeletal and rammed party stand soaring raucous row after raucous row as West Indies fell just short in a thriller against New Zealand and Morgan himself frying panned Afghanistan into the far distance with 17 sixes. This year, some padded sponsored space fills the gap where the stand would be. Behind it nets, red brick houses and the late-summer trees of Trafford, where the world continues outside the bio-bubble. Inside, the seats are empty, though stewards remain, as do the booming tunes, blaring to an empty ground, the watching hills of the peak district the nearest thing to an audience.

Tom Banton and Jonny Bairstow had jump-started the England innings, chasing 196, with 65 off the power play, taking chances, but winning them, balls falling just short of fielders in the lime and turf chasing their own shadows. Where Bairstow swivel-pulled, Banton nudged behind square, where Bairstow nudged Amir to the boundary, Banton swivel-reverse-swept for six.

Pakistan needed a break, and they got one in the seventh over when Shadab Khan picked off both openers with successive balls, as both of them launched into ill-advised sweeps. Bairstow top edged to Imad for 44, then Banton swished but missed the ball but was hit low on the right thigh, given out both on the field and on review. Morgan walked in for the hat-trick ball, and was hit on the leg but escaped Pakistan’s review, by the fickleness of an umpire’s call. It was to be a turning point, as he cut a swathe through the Pakistan attack, reaching his 14th fifty in IT20s with walloping boundary off a low full toss, with Dawid Malan playing the sensible older brother, always ready to punish the bad ball. The pair of them took England to almost-victory, until Morgan fell, but it was too little, too late for Pakistan.

Billings, caught at backward point, and Moeen, clopping to mid-wicket, fell cheaply, but Malan was still there at the end, 54 not out.

After Eoin Morgan won the toss and decided to chase, both sides naming unchanged sides from the rain-soaked game on Friday. Earlier Babar Azam and Mohammad Hafeez, young(ish) pup and old(ish) master had taken it turns to pancake and then spatulate the England bowling attack on a flattish pitch with a screaming outfield.

Babar pulled the very first ball of the match from Saqib Mahmood for four over the midwicket boundary, and continued in the same vein, chips, clips and glorious late cuts. He and Fakhar Zaman took 51 off the power play until Fakhar top edged to the lanky Tom Banton off Adil Rashid.

Babar continued, balletic footwork and stretch preventing him from being stumped, and he pulled and then off drove Rashid to reach his fifty, top hat and tails, off just 37 balls. Mohammad Hafeez, eye now in, snapped the returning Saqib Mahmood for six, cracking the ball, a ringmaster with his trusty whip. Barbar miscued Rashid to a grateful Sam Billings

Hafeez then soared into this shots, all wristy elegance and stylish shapes, a ramp even, at the grand age of 39, to reach fifty off 26 balls until he holed out to a military moustached Tom Curran, to the penultimate ball of the innings. An intelligent over from Curran, conceding just scampered runs and a wicket, prevented Pakistan reaching 200. It didn’t seem enough, and it wasn’t.

The match was broadcast live on BBC one for the first time in 21 years, the last came during the World Cup of 1999 when a bits and pieces England fell at the first hurdle, failing to qualify for the Super six stage of their own competition with a whimper.

This time around, England’s batsmen have learnt to brutalise. - Guardian