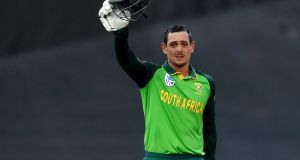 Captain Quinton de Kock smashed a sparkling century as South Africa eased to a seven-wicket victory against world champions England in an opening one-day international (ODI) at Newlands in Cape Town on Tuesday.

After being put into bat, England overcome a top-order wobble to post 258 for eight in their 50 overs, helped by a well-constructed 87 from Joe Denley in the side’s first ODI outing since lifting the World Cup at Lord’s last July.

The second ODI will be played in Durban on Friday, with the three-match series ending in Johannesburg on Sunday.

England fielded just five players who featured in last year’s World Cup final having rested Ben Stokes and Jos Buttler for this series, with seamer Chris Woakes the only survivor from the bowling attack.

But De Kock and Bavuma played risk-free cricket, rotating the strike superbly, while hitting boundaries when presented with the opportunity to do so.

De Kock reached his 15th ODI century in 106 balls before he was bowled by the part-time spin of Joe Root.

Bavuma, playing in only his third ODI, was trapped leg before wicket by Chris Jordan just two runs short of what would have been a deserved maiden ton, but played a crucial role in sealing the win.

England started their innings brightly, reaching 51 without loss in the 10th over, but lost five wickets for the addition of another 57 runs as their top-order crumbled.

Jason Roy (32) looked in good touch before he picked out to Hendricks at long-off from the bowling of spinner Jon-Jon Smuts, and Jonny Bairstow (19) fell to Andile Phehlukwayo.

Root (17) was brilliantly run-out by sharp work from Rassie van der Dussen at backward square-leg, and when captain Eoin Morgan (11) was caught by Bavuma at slip from leg-spinner Tabraiz Shamsi (3-38), the home side were on top.

Shamzi also picked up the wickets of debutant Tom Banton (18) and Sam Curran (7) to leave England reeling, but Denley and Woakes (40) put on 91 for the seventh wicket to help the visitors post a sizeable total for the home side to chase.