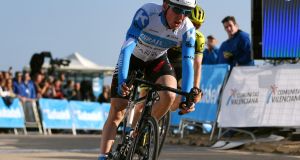 Dan Martin showed strong early form on his second day of competition this season, placing fourth on stage two of the Volta a la Comunitat Valenciana in Spain. Martin reached the top-of-the-summit finish of Cullera with the front-runners and sprinted for the stage win.

Tadej Pogacar (UAE Team Emirates) was quickest, edging out former world champion Alejandro Valverde (Movistar Team) and Dylan Teuns (Bahrain McLaren). Martin finished just behind the trio, getting a boost of confidence at this early point in the year.

He had finished in the main bunch on stage one, although a split in the group meant that he conceded three seconds to the sprinters. They won’t figure in the final general classification, though, meaning the time loss is inconsequential.

Martin is ninth overall after two stages. Friday’s third stage is likely to end in a sprint finish, although a hill just over halfway could reduce the number of riders in contention. Martin will hope for a strong showing on Saturday’s big uphill finish, which will almost certainly determine the final general classification on Sunday.

“Given the fact this is the first time that we ride together with this team and the relaxed way they helped me during the race, we did a really good race,” he said afterwards. He was fourth overall last year and fifth in 2017.

Martin moved to the Israel Start-Up Nation team this season after two years with the UAE Team Emirates squad. He has said being in a new environment has given him a psychological boost and a chance to reset, both important factors after what was a largely frustrating 2019 season.

Israel Start-Up Nation’s directeur-sportif Dirk Demol said: “Of course we were dreaming of the win, but there are many more champions here in Valenciana and 4th is good as well.”

Meanwhile, Ryan Mullen is also in action this week. Mullen previously rode three of the events which form part of the Mallorca Challenge, netting a highest finish of 52nd in the Trofeo Playa de Palma on Sunday. He was 41st and 65th on the opening two days of the Etoile de Bessèges in France and is 48th overall.

In addition to building form and helping his Trek-Segafredo team, his goals will include a strong showing on the final day time trial on Sunday.

1 Germany well ahead of the curve as Bundesliga gears up for return to action
2 My favourite sporting moment: Roscommon minors restore pride to a county
3 Stephen Kenny: ‘I want people to come and look forward to watching this team’
4 America at Large: Hurling fan Dowling leading the fight against Covid-19
5 Cheltenham cited Boris Johnson’s Twickenham trip as a reason for Festival green light
Real news has value SUBSCRIBE